Lori Harvey’s rumored relationship with Trey Songz has apparently led a commenter to slide into her Instagram comments and call her a name. But the model’s mother, Marjorie Harvey was not having it. She clapped back and then the real virtual tussle ensued.

The 21-year-old eagerly shared her excitement over her upcoming birthday on Instagram Jan. 2 writing, “Capricorn Seasonnn 🐐.”

Mama Harvey hit back saying, “this is my daughter…..not your mother 💅🏽” 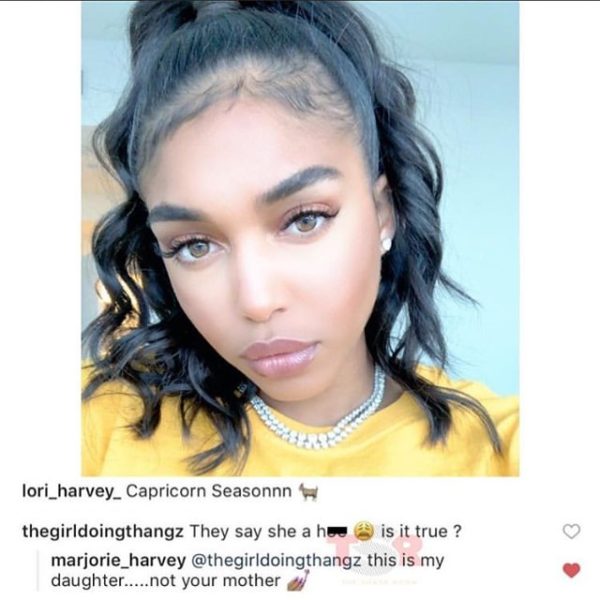 Several applauded Marjorie for standing up for her daughter, who has reportedly been dating Songz for nearly a year despite announcing her engagement to Dutch soccer star Memphis Depay in June 2017.

Yet Lori’s dating history is more colorful than Songz and Depay.

When photos were snapped of Lori and the crooner together in December, rapper Future came forward to assert that he may have dated her too.

“You ducked too late. I see you,” the rapper said in a video on his Instagram Story. “I like that. It’s cute. Cute, keep it up.”

He wasn’t the only star kissing and telling, either. Diddy’s son Justin Combs wrote and then deleted, “Should’ve ducked sooner !!” on a Dec. 21 Instagram photo caption.

As such, other commenters began pointing out Marjorie’s past. Steve Harvey’s ex-wife accused him or having an extramarital affair with Marjorie. In a 2017 $60 million lawsuit, Mary Shackelford claimed her husband of nine years cheated on her with Marjorie, whom he later wed in 2007. The lawsuit was ultimately thrown out in May 2017.

Additionally, a 2017 report from Radar Online stated that Marjorie was married to drug lord Jim L. Townsend, with whom she has two kids. The DEA and FBI investigated Marjorie over her husband’s drug ring and Townsend was locked up for 26 years after being pardoned by Barack Obama in 2017. Five years into his sentence, however, Marjorie left him and got involved with another drug lord, Donnell Woods, who is Lori’s father.

“That’s real funny considering her mother, Marjorie, has a really nasty past is known to be Reckless with other people’s husband.”

“Marjorie I’ma need you to sit this one out sis. We all know Marjorie a throwback hoe.”