NBA star LeBron James and his wife, Savannah James, make it look way too easy. The famous couple stepped out this week in eye-catching ensembles for a special date night in honor of their friend Rich Paul’s birthday celebration.

On Thursday, Dec. 15, the Los Angeles Lakers star and the interior designer were spotted leaving dinner at Olivetta in West Hollywood. The mother-of-three’s outfit included an aqua green jacket that she wore over a mini black velvet dress. She accessorized her look with a pair of black heels and a feathered purse and finished it off with her signature long blond locks.

LeBron meanwhile wore an all-navy look that included a varsity jacket and pin-stripe pants with a baseball cap. Thefour-time NBA champ was also spotted wearing a pair of Air Max1 Saturn Golds from the Travis Scott and Nike collaboration.

Fans took to their social media platforms where they couldn’t help but gush over the high-school sweethearts, including one Twitter user who wrote, “If LeBron is King, Savannah is God. Very classy beauty,” referencing the ballplayer’s fan-given nickname “King James.”

Another fan wrote, “I’m so glad she’s black first and foremost but babbyyyy this woman is GORGEOUS & BEAUTIFUL,” while another inserted, “Your eyes go to her immediately.”

“Very beautiful couple and they still holding it down. May GOD continue to bless their union,” said another admirer as the kind remarks continued to pour in.

Earlier this month, Savannah floored her nearly two million Instagram followers when she showed off her process of getting glammed to attend the 2022 Art Basel in Miami. In the clip, she was seated as a stylist pinned up and curled her hair as she took viewers through the various steps of her makeup routine. In the end, she revealed a subtle, yet jaw-dropping look. 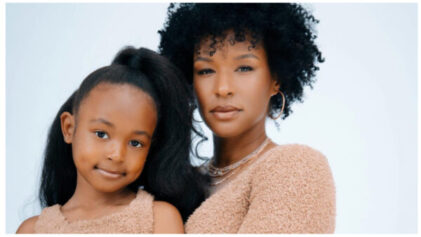