“Love and Hip Hop: Hollywood” actress Nia Riley shot back at folks who made rude comments about her weight gain. 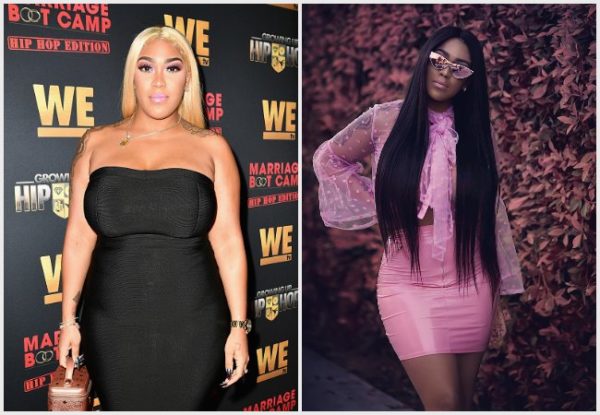 Nia Riley hit the red carpet (left) at the premiere party for We TV shows “Marriage Boot Camp: Hip Hop Edition” and “Growing Up Hip Hop” on Jan. 9, 2019, as a noticeably different figure than she was in March 2018 (right). (Photos: Earl Gibson III/Getty Images for We TV, Riley’s Instagram)

Several of Riley’s cast mates were also in attendance at “GUHH” premiere party, including  Tammy Rivera and her husband Waka Flocka, Jessica Dime, Nia Riley, as well as Lil Mo and her husband Karl Dugan.

However, some folks turned their eyes to Riley’s fuller figure. One naysayer tried fat-shaming the star by calling her a “fat slob” in her DMs.

The 29-year-old star hopped on Twitter on Jan. 10 and fired back at folks who seemed to have a problem with her newfound curves.

“Why the f*ck y’all care about my weight so much? When a b*tch was skinny and depressed AF and had no ass that was a problem too,” she wrote on Twitter. “Let me enjoy my fat a– and be happy damn!” Riley reaffirmed her love for her body by adding, “BTW. Still take yo n*gga. Fat and all.”

She also addressed the male fan who attacked her new-formed curves by tweeting, “What would possess you to have such anger toward a stranger or someone that’s never done anything to you?!. …  he gets no p***y clearly worried about my fine a** at this time of night! #RealBody.”

Riley stars on “Marriage Boot Camp” with her longtime boyfriend, rapper Soulja Boy. The pair’s storyline focuses on their ongoing issues in their relationship. They’ve been off-and-on for almost ten years, but Riley expressed that the rapper publicly embarrassed her multiple times by cheating on her with different women, aired all their business on social media, and called her out of her name.

“Being with Soulja Boy is annoying. He’s a cheater, he’s embarrassed me a million and one times, and he has to tell the whole world our business,” Riley said. “We got issues.”