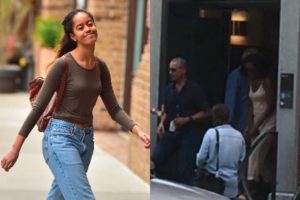 Malia Obama took a gap year before her parents Barack and Michelle dropped her off at Harvard Monday. (Alo Ceballos/GC Images/Sandly Alteon-Senat/Facebook screenshot)

After taking a gap year after high school graduation, the time has come for Malia Obama to leave her parents and younger sister behind and begin school at Harvard University.

On Monday, Aug. 21, Barack and Michelle Obama dropped off their older daughter on campus, where the former first couple graduated from law school decades ago.

Wearing dark glasses and escorted by the Secret Service, the 44th president and former first lady ducked into their SUV after saying goodbye to their daughter. The Daily Mail reported the couple took advantage of the solar eclipse by having Malia Obama move in a day early while everyone was distracted by the natural phenomenon.

Before heading to the Ivy League, 19-year-old Malia Obama toured various private universities, including New York University, Brown, Columbia and Princeton, where Michelle Obama graduated from in the 1980s.

Party! Malia Obama Lived It Up Before Beginning Her College Career