The story originates from the eponymous NAACP Award-nominated book by author Jewell Parker Rhodes. The story is centered around “12-year-old Donte, who wishes he were more like his popular, lighter-skinned brother, Trey. After being framed by the school bully, and school fencing captain, for something he didn’t do, Donte joins a local youth center and meets disgraced, former Olympic fencer, Arden Jones. With Arden’s help, he starts training as a competitive fencer, setting his sights on taking down his nemesis.”

Curry and Peyton released a statement about the book, saying, “Jewell’s Black Brother, Black Brother is a powerful story that addresses prejudice, colorism, and bullying through an amazing sports lens. We are thrilled to be partnering with Netflix, it is really the only place it belongs.”

“Black Brother, Black Brother” was chosen to be made into a film after Curry picked it to be a part of of his “Underrated” book club. The Golden State Warriors star launched “Underrated” in August 2020, and said it was meant to highlight and “celebrate stories of overcoming expectations, barriers, or whatever is thrown at you, and authors who aren’t getting opportunities.”

This is not the only project Unanimous Media has in the works with Netflix. The popular ’70s series created by Norman Lear called “Good Times” is another project that the multimedia company is working on along with Lear and his Act III Productions, Sony Pictures, and Fuzzy Door. The sitcom, which aired for six seasons, is being turned into an animated series.

In a statement, Curry and Peyton said, “​​Good Times strives to remind us that with the love of our family we can overcome any obstacle. We think, now more than ever, the world needs to see a show with hope and positivity.”

It is not clear when either project will drop, but “Good Times” is currently headed to production. 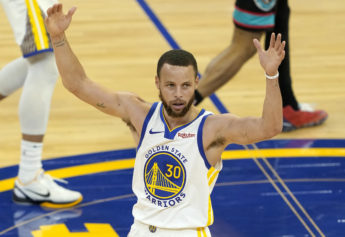