Bow Wow seems publicly to be claiming only one child when earlier this year fans got the impression he was the father of two.

On Friday, Sept. 17, he hosted a #askBow session on his Twitter, allowing fans to ask any questions they want, with him answering. Fans asked him questions about everything from his music to movies to the Millennium Tour, an event that was rescheduled because of the COVID-19 pandemic and is set to make its way between October and November to several cities nationwide. Bow Wow will co-headline with Omarion. Some other artists included in the lineup are: Soulja Boy and Ashanti.

But what really caught fans’ attention is what the “Shorty Like Mine” rapper had to say about his children — or child. One fan asked, “What’s your biggest accomplishment?” to which he replied “Shai,” referring to his 10-year-old daughter, whom he shares with dancer Joie Chavis. Fans were left puzzled by the answer because last year Moss allegedly welcomed his son, Stone Moss, with a woman named Olivia Sky.

Sky and Bow Wow have had online disputes, but that did not stop Bow Wow from wishing Stone a Happy Birthday when he turned one in June. Even then he claimed him as his son, but he deleted the post shortly after uploading it, which also raised questions at the time.

But now it looks like Bow Wow is sure that Shai is the only child he has. During #askBow, someone asked, “where baby wizzle at” and he responded, “Shai is on set.” The fan clarified and said, “Nah the other baby fam” and the former “106 & Park” show host responded “Huh.”

Then he went on to address other subjects that fans were asking him about like a potential Diddy and Jermaine Dupri “Verzuz” battle, but eventually fans pressed harder about Stone. One said, “what bout your other rugrats? you have a son or i’m trippin” he said, “NP- Billie Jean – NP stands for Now Playing. Many know that “Billie Jean” is a Michael Jackson song where Jackson sings about a woman that is claiming her son is Jackson’s and he sings “But the kid is not my son.”

Someone else asked if he wanted more kids, and once again he only claimed his daughter. He responded, “HELL NO im fine w shai!” Another person asked once more “Don’t you have a son” and once again Bow Wow responded, “NP Billie jean for the 2nd time.”

Sky has yet to respond to Bow Wow’s remarks. 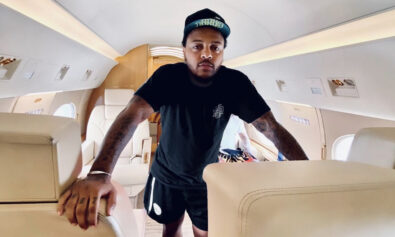