Chloe Bailey is once again putting that body-ody-ody on display. On Monday, April 12, she uploaded a few pictures of herself wearing a black one-piece outfit with several unique cutouts and an olive green wrap above her knee. In the first two photos, she stands showing the entire front part of her body, but in the last two, she turns to the side, giving her fans a good view of her left thigh.

“Nothing like a good mirror selfie ☺️😇,” she wrote in the caption. Many of Bailey’s celebrity peers and fans showed her love in her comments. Actress Jurnee Smollett is one of the celebrities that took it upon herself to leave a funny compliment for the singer. She said, “How many times can I like this!?!?! 🔥🔥🔥🔥🔥🔥🔥🔥🔥🔥🔥🔥🔥.”

A fan said, “Cakes by the pound and they from Whole Foods so they all natural no hormones,” referencing a lyric from the song “Yonce” by Bailey’s mentor Beyoncé, while also praising her for having a natural body.

All of this praise that Bailey gets for her sexy pictures is pretty common now, but wasn’t always when she first started to do it. Before this year Bailey and her sister, Halle, who makes up the other half of their music group, Chloe x Halle, only had joint social media accounts. But in January, they decided to branch off into their own accounts while also keeping the joint one. It was then that Bailey took off with posting her risque photos, initially getting some backlash for doing so. Luckily, her fan base swooped in to defend her from her trolls.

On Sunday, Jan. 31 the 22-year-old went on Instagram Live tearfully thanking fans for embracing her while addressing the subject about her being more revealing. A part of what she said was, “It’s really hard for me to think of myself as a sexual being or an attractive being, quite frankly. So, when I see all the uproar about my posts and stuff, I’m a bit confused. Like I really don’t understand because I’ve never seen myself in that way or in that light.” She also left an encouraging message for women that may be going through the same thing. She told them, “Don’t change who you are to make society feel comfortable.”

Since posting that Live, she has been living by her own message and continuing to post whatever personal pictures that she likes. 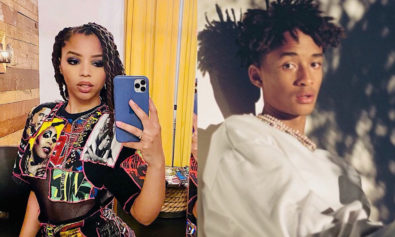 ‘Ya Basic’: Chloe Bailey Slams Social Media Trolls, Shares Her Tip on How to Deal with the Haters