It’s been two months since news broke about social media influencer and comedian B.Simone finally getting a “BOYYYYFRIEND” and the two seem to be going strong.

The two rarely post each other in hopes to keep their relationship private, but last night was an exception since B. Simone was celebrating her birthday. Neither of the lovebirds revealed exactly where they were going to celebrate B.Simone’s 31st, but she did share on her Instagram story that the two were taking a romantic ride on a love boat. The next clip of Simone and her NFL player boyfriend, Chris Smith, showed them sharing a hug and a kiss after debarking.

Fans showed their support for Simone’s relationship after the videos surfaced. One person said, “Happy for them both….I love seeing black love and if you Dont go fix whatever is within u❤️.” Someone else wrote, “I’m happy for her to be honest . Love is beautiful and I see it all over they face 😍😍.” Another simply put “They’re cute.”

Although they have not officially announced that they are together on social media, like so many others do, it was pretty obvious back in February when Simone made an appearance at Smith’s birthday party. In the pictures that surfaced from the celebration, there were small photos used as decoration at the party and in a few of those photos, Simone and Smith can be seen getting a little cozy. Hours after the party, the two both shared on their respective social media pages that they were in Mexico, confirming that they were there together.

Simone’s birthday was on April 5, and she celebrated with her fans by releasing her new lash bundle called “Rebirth.” She also took time to thank her man and her family members for helping her celebrate her special day. Under a photo of herself she wrote, “To my family , my friends and to the love of my life … Thank you for making this the best birthday ever ❤️ My heart is so full and I haven’t been this happy in a long time. I’m so grateful for the presence of God in my life. He is real I’m a living testimony 🙏🏽 Keep fighting for love, peace , joy and happiness! I fought hard as hell to have them all…. now I do 🙌🏽.” 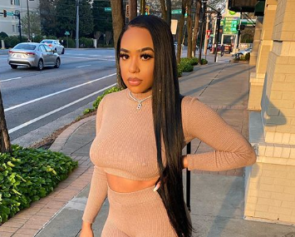 ‘That is Hilarious to Me’: B.Simone Laughs Off the News That She Allegedly Stole Her Message About Manifesting Love from Two Other Women