The “Love and Hip Hop: Hollywood” stars, along with Fizz’s new girlfriend, Apryl Jones, got into an intense argument on this week’s episode about the pair’s co-parenting relationship. Slaughter, who shares a 9-year-old son with the B2K rapper, suggested that she wanted better communication between them regarding their child. Fizz, on the other hand, felt Slaughter only wanted to communicate with him because of his new relationship with Jones, although Slaughter disagreed.

On the Nov. 4 episode, Fizz and Jones showed up together at a birthday party for one of their cast mates to confirm their relationship status to their peers, including Slaughter. The mother of one, however, brought it to the couple’s attention that their sneaky relationship was affecting her and Fizz’s son. Slaughter claimed their 9-year-old felt he had to lie about his father’s relationship with Jones because Fizz apparently didn’t want her to know.

“You and I have not been seeing eye-to-eye lately pertaining to solely co-parenting,” she said to Fizz. “What do you feel like the issue is that prohibits us from actually being healthy co-parents?”

“The only issue is when you talk to me it’s never about Kam,” Fizz responded. “Even the conversation right now.”

After going back and forth for minutes, Fizz dismissed Slaughter and walked away from her mid-conversation. He then suggested to Jones that Slaughter was on a mission to sabotage their relationship. Jones had already added during the previous episode that she believed Slaughter is still in love with Fizz.

“LHHH” viewers, however, felt Fizz was wrong for disrespecting and dismissing Slaughter when she apparently tried to have a “civil” conversation with him. The B2K rapper’s behavior sent fans into a fury.

“The way Fizz treats Moniece has me sick to my stomach 😫 he sounds stupid. Mo just wants respect from her child’s father . She is human and I really feel bad that they are treating her this way”

“Fizz is wrong , respect the mother of your child ! April makes it worse when she speaks upon their situation. He needs to grow tf up!”

“This situation is crazy to be honest! I’m not gonna speak on whose wrong. I will say they need to get it together you don’t need all that drama around their kids. It should be a peaceful matter stop going back& forth with each other.”

“My heart go’s out to Moniece. It’s sad that Fizz made her out to be the bad guy for years🙄 . But it’s him who fails to see the bigger picture. Co parents make sure to still have a respectable relationship” 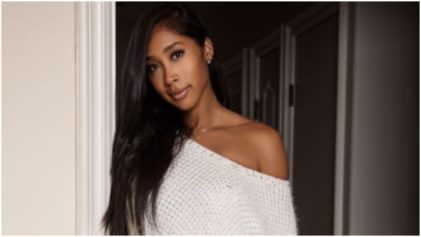 Apryl Jones Says ‘People Don’t Want Me to Be Black’ While Trying to Explain Why Men Gravitate to Her: ‘We Have to Create This Scenario That She’s an Exotic’