Reality star and author Toya Wright has been hellbent on keeping her romance with beau Robert “Red” Rushing under wraps. However, she’s slowly come around to offering fans a peek into their loving relationship. The couple have already welcomed a beautiful daughter, and fans are hoping wedding bells might be next.

Here are five facts to know about the “T.I. and Tiny: Friends and Family Hustle” actress’s man. He’s Related to R&B songstress Faith Evans
Greatness runs in the family! Rushing is the cousin of “Bad Boy” singer Faith Evans, who rocketed to fame in the early ’90s and went on to sell over 18 million records. Her musical career has spanned over two decades. He’s Younger Than Toya
The sports manager is 31 years old, making Wright five years his senior. In this case, it looks like age ain’t nothing but a number when it comes to love. He May or May Not be Toya’s Fiancé
Wright, 36, sparked fans’ speculation of a marriage proposal after posting photos from the uber-romantic, lavish dinner date Rushing surprised her with earlier this summer. Their date night, which turned in to a weekend getaway, was replete with a nice dinner aboard a private jet and fresh-cut flowers — the perfect setting for a perfect proposal.

It’s alleged the two jumped the broom during a private ceremony, but those rumors have yet to be confirmed. 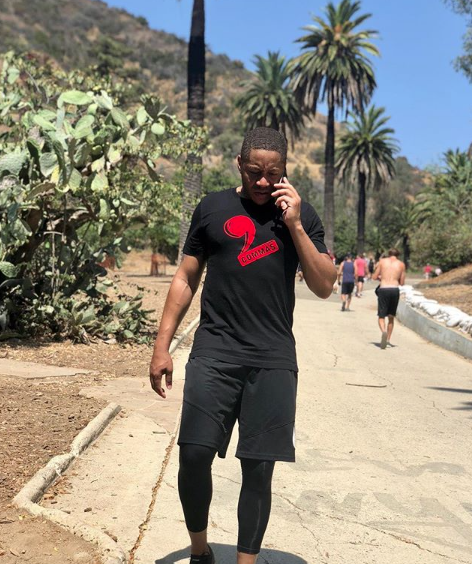 He’s the Owner of 2 Commas Clothing Line
Rushing is the brains behind the urban apparel line, which was inspired by  the ultimate “American dream” of becoming a millionaire. The brand offers everything from hoodies and T-shirts to footwear and activewear.

“Whoever you are and whatever you are doing, your tangible goal is to make 2 Commas,” according to the website. “That’s the inspiration behind our design.”

He Once Owned a Travel and Lifestyle Brand
Rushing previously headed a travel and lifestyle company that catered to NBA athletes. Among his claimed celebrity clientele were NBA superstar LeBron James and former teammate Tristan Thompson.