The “King” artist, who’s the husband of Tiny Harris, Pullins’ mother, has raised her as his own child since she was 5 years old, so it’s no wonder he was seemingly offended by a fan’s comment, calling him Pullins’ stepdad.

In a heartfelt post wishing his baby girl a happy 23rd birthday, T.I. posted a photo collage of himself with Pullins, using a gang of pictures from over the years.

“Daaaaamn @zonniquejailee I can’t believe you’re 23 years old baby girl 😱!!!! I’m soooo super proud of the beautiful,intelligent,talented young lady you’ve grown into,” the musician wrote on Instagram. “You’ve always been a great kid that never (got caught😉) getting in any trouble…. So I’m not surprised that you’re not having any trouble being a great young woman!!! I LOVE YOU TO NO END!! Celebrating you every step of the way 🎊🎉🎊🎉!!!! Happy Birthday sweet baby!!! Love- Pops👴🏽.” Pullins chimed in underneath T.I.’s post, saying, “Aww pops I love you endlessly!!! … thank you so much! You know how I’m coming about you periodddd.” T.I.’s clapback incited other fans to chime in on his fatherhood to Pullins.

“We all know you was there from the beginning! You’re her dad not step father 👏🏾👏🏾!”

“This man ain’t no step fawwwkin step father! Don’t disrespect him or His Daughter! T.I. You are a wonder Father! God Bless you and your family!🙏🏾❤️.”

“T.I. you’re a great pops and dad this caption is extremely priceless @troubleman31 👏🏾 .”

A few years ago in 2016, there was an exchange of words between Tiny Harris and Zebo’s wife, Cheryl Redmond Pullins, about T.I. claiming Zonnique as his daughter. The two threatened each other in a series of now-deleted Instagram posts. 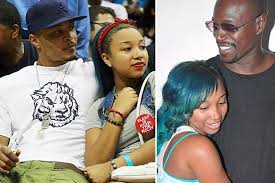 The “Troubleman” rapper posted a photo of himself with Zonnique at the time with a caption that read “Mines!!!”

Cheryl Pullins was apparently upset that her husband Zebo was made out to look like an absentee dad who wasn’t a part of Zonnique’s life, and she fired off on T.I. Tiny Harris then stepped in, defending her husband by saying that it was he who paid for her daughter’s private school tuition and treated her as his own.

Zonnique eventually had the last word and addressed Cheryl by saying, “Ya’ll don’t do half the stuff my mom or Tip does for me. So I wish you would stop talking about receipts.”

‘Thought This Was Lil Kim’: Tiny Harris’ New Look Made Fans Do a Double Take