“Black Ink Crew” New York cast mate Sky Days had an explosive fight with the father of her youngest son, and it revealed shocking new truths.

Days reunited with her sons Genesis, 20, and Dessalines, 19, during season 4 after giving them up for adoption in her early teens. She established a tight-knit relationship with her youngest son Dessalines, whom she kept in contact with after the season ended. However, it seems that Des’ biological father who evidently goes by the name “Red” is looking to meet his son for the first time. 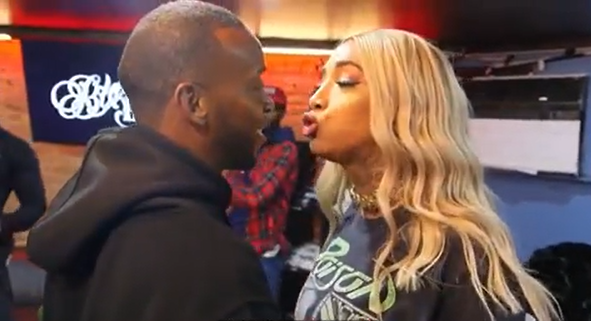 During the March 13 season premiere of “Black Ink” Days unexpectedly got a visit from Red and it messed up her entire mood. He claimed that the 33-year-old boutique owner told him that he could see Des once he turned 18.

Days explained that she doesn’t feel comfortable putting that “dirty mutherf–ker” in contact with her son because she was only 14 years old when she delivered Des. Red was 28.

“You’re a predator,” the mother of two said in her confessional, referring to Red. “Why would I put you into contact with my son when you’ve done unspeakable things to me?”

After Days continued refusing to give Des’ father his son’s contact information, he goes off the rails, calls her a “f–king liar” and tells her to “grow the f–k up” which sent her into an angry frenzy. The two got into a heated verbal altercation, prompting Days to get in his face. He was eventually escorted out of the shop.

The scene highlighted three shocking truths: 1. Days was a minor when the father of her youngest son had sexual relations with her; 2. The My Secret Boutique owner gave birth to Des at 14, meaning she was at as young as 12 or 13 when she had her eldest son Genesis and; 3. Days’ boys are not twins, which means former cast mate Dutchess Lattimore has been redeemed.

Days and Lattimore, Ceaser Emanuel’s ex-fiancée, have been at each others throats for the past few years and continue to spar with each other on social media today. Their feud began in 2017, when Lattimore allowed Genesis and his father Big Reese to be interviewed in her North Carolina tattoo shop. The entire interview was Genesis seemingly bashing his mother for not being involved in his and his little brother’s life as children.

When Lattimore was asked if she felt bad about the situation, she told “The Breakfast Club” that Days should be worried more about being a mother. She also brought up the fact that the mother of two lied about having twins.

“Can I just say one thing first? Number one: Sky said that she had twins on the show, didn’t she? She said that she had twin boys and she gave them up when she was young because she couldn’t take care of them. The first lie you lied about was the fact that they’re twin boys,” the Pretty Ink owner told “The Breakfast Club” in December 2017. “One son is 17, one son is 19. That’s not twins. I don’t know how your uterus can contract them type of twins. I’m just saying.”

Lattimore also did a recent interview speaking on Days and her sons once more. Where and when the interview took place is unknown, but the former “Black Ink” star sure had a lot to say about Days.