Loyal fans of “Love and Hip Hop: Atlanta” alum Joseline Hernandez are defending her and her 2-year-old daughter Bonnie Bella against fashion critics.

Hernandez appears to dress her 2-year-old in outfits that doesn’t sit well with some social media users. The 32-year-old mother took to Instagram on Feb. 21 and shared a photo of baby Bella on her way to school. The toddler looked quite spiffy in her pink and navy blue striped shirt, navy-colored skirt, red cardigan and matching hair bow. She also had on a pair of pink socks and multi-colored shoes. “On my way to school like a good girl!” Hernandez captioned the photo of baby Bella.

“She be havin that baby so dam tacky,” one negative Nelly wrote. “She looks a f–king mess.”

A second commented, “Ya’ll need to dress her better wtf why got on pink socks 🤦🏾? She always look a damn mess.”

Fans of the “Puerto Rican Princess” swooped in and denounced critics for attacking both Hernandez and her daughter.

“Shame on you grown folks that get on here and say anything negative about this baby,” one fan commented. “She’s just a baby 🤦🏾! Too bad there are sad people like you. Good job you’re doing a good job mama.”

“Joseline she looks beautiful❤️,” another added. “Forget these haters, they are pathetic talking about a child.” 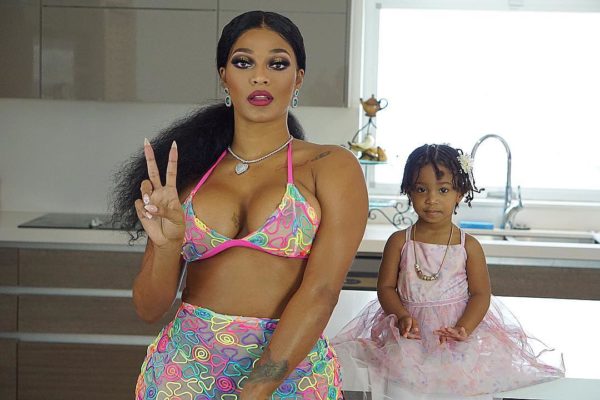 Hernandez shares her 2-year-old daughter with her ex-fiancé, music producer Stevie J. The pair’s child arrived in December 2016, just a few months after they called it quits. A year after their daughter’s birth, the former couple descended into a nasty custody battle that was settled in April 2018. A Georgia judge awarded Hernandez primary physical custody and Stevie J. joint custody. He was, however, ordered to pay his ex-fiancée $1,000 a month in child support, which Hernandez has claimed he has stopped doing.

The Latin rap artist said she’s focused on becoming a better mother for the sake of her daughter and heading to turn over a new leaf.

“Everything that I went through in my life, I want my daughter not to have to go through. … I think that becoming a mother makes you focus so much more in your business,” she told Huffington Post in 2017.