Rumors have been buzzing that G Herbo cheated on the mother of his son, Fletcher with Williams. Since the rumors started to circulate, Herbo and Williams have been seen out and about together.

Fletcher addressed the split up, and the rumors of the rapper cheating with Williams. “Let him and that little bird a** h*e run around,” Fletcher said on her Instagram Live on Wednesday.

The Shaderoom shared the since-deleted video on Wednesday and Carter decided to intervene on behalf of her friend. She commented, “My friend is classy and carries herself like a real young lady… far from a bird. Let’s just get that straight. Tuh I hate when females mad and tear down the other female. Its not cool and it won’t get him back sis.” 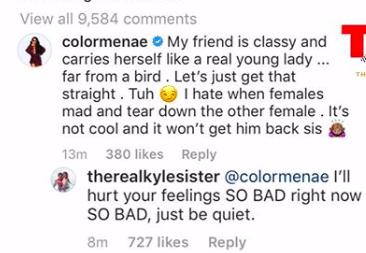 Fletcher was not having Carter’s two cents and words of advice. “I will hurt your feelings SO BAD right now SO BAD, just be quiet.”

Carter then took to her Instagram Live not too long after, to respond back to Fletcher subliminally. “From now on I will not entertain anything irrelevant, and not helping me, benefiting me, nor putting money in my pockets.” She continued, “I got big things going on. I got a movie coming out next year, check Lifetime out. And I’m filming a TV show next year. I got big things going on and I don’t want to ruin that.”

This isn’t the first time Carter had to fight off haters attacking her friend. Earlier this month the 20-year-old and her pals took a group vacation to Los Cabos, Mexico to celebrate her birthday. In every picture, the group dressed in similar colors. However in one photo, Williams was the only friend to ignore the dress code of pastel pink. She instead wore a hot pink dress similar to the birthday girl. Fans noticed the pic and left comments suggesting Williams was attempting to steal attention from the Carter. “Someone missed the memo.”  Carter responded back, “it wasn’t a memo. Shut up and like the picture or just scroll.”