Yandy Smith posted a few photos this week that had fans confused.

She captioned the fashion images, “I hear you doing a lot of talkin…Next time make sure you say”She doing her thang tho” 🤷🏽‍♀️✊🏾😔😝 now shhhhh🤫.” However, folks turned their attention to Smith’s belly that’s semi-bulging out of her dress. Fans accused the star of being pregnant despite her husband  Mendecees Harris still being locked up behind bars.

One person wrote, “Ya’ll just gone act like that’s not a baby bump.”

Another asked, “Do U have a baby in the oven?”

Smith quickly silenced the accusations and responded in the comments, “It’s not at all. I’m just eating good boobookitty.”

Nevertheless, one fan wasn’t buying into the star’s statement and commented, “Umm that’s a baby bump🤷🏽‍♀️😭 you not eating that much food.”

Smith and her husband share two children together, their son Omere and their daughter Skylar. She also recently adopted a teenage girl, Infinity Gilyard, who she met during a program three years ago.

Smith’s spouse Mendeecees, was sentenced to eight years behind bars in 2015 for drug-trafficking, as part of a plea deal. He was hoping to get his sentence reduced due to good behavior, but the judge denied his request in February. 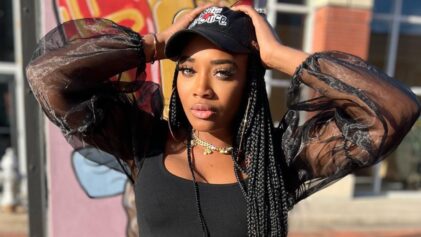