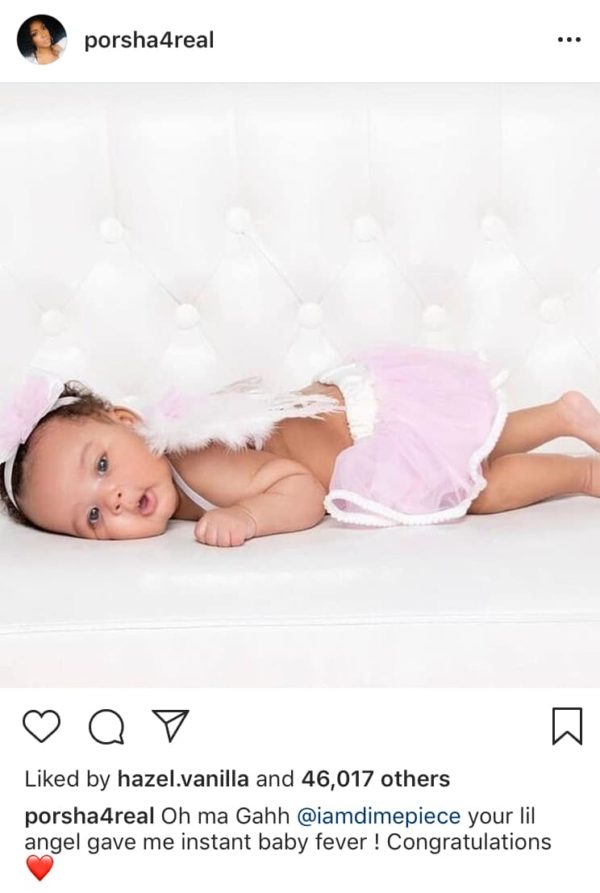 Fresh off rumors that she’s heading down the aisle with boyfriend Dennis McKinley, “The Real Housewives of Atlanta” star Porsha Williams might be looking toward motherhood soon.

Dime’s birth was showcased on the season 7 finale of LHHATL earlier this month, but the rapper’s daughter with fiancé Shawne Williams was actually born on April 23.

Meanwhile, Williams’ fans eagerly agreed about the cuteness of the 2-month-old.

“She is just Gorgeous!!”

Williams’ desire for children is nothing new. She was open about her desire to start a family with then-husband and ex-NFLer Kordell Stewart during their marriage, which ended in 2013. She also famously had her boyfriend Todd Stewart sign a “baby-nup” during the ninth season of RHOA when she caught baby fever from her niece Baleigh being born.

“It’s an agreement so we don’t have to argue later. We can argue now!” she explained on the show of what it was. Todd wasn’t up for the agreement, however.

“I’m not signing that and if that means we’re not together, then that’s your loss,” he told the “Go Naked!” hair company founder.

Williams was left “disappointed” and “baffled.”

However, Williams had recovered from the obsession with having kids saying that finding a way to make it happen without a man helped her move on.

“I’m okay right now. I’m not going to have a baby until I’ve found that right guy. And I’m sure once I find him, that’ll be one of the first things we do,” she told People magazine last year.

“For me, I’ve thought of a lot of creative ways I can make that happen without a man. Once I realized it doesn’t have to be one way, then it gave me a little more time,” she continues. “So I’m not obsessing over it anymore.”