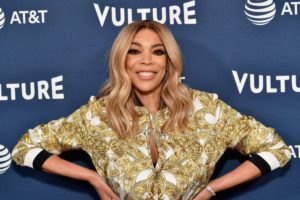 Wendy Williams isn’t known to hold anything back and be soft, but during a recent discussion about Kanye West, she surprisingly showed some sympathy.

“I think that mental illness is something that is so real. A lot of people in jail right now, if they could’ve just gotten through some mental illness counseling, [wouldn’t be incarcerated],” Williams said at Vulture Festival’s “Ask Wendy Williams” event.

“As long as I’m here and you’re listening, I will tell you I feel very, very bad for Kanye West,” she added. “His father is nowhere in the picture, his mom passed away trying to beautify herself to be a stage mom. I’m not going to talk about his wife, his family, or anything like that. But what I will tell you is that he’s not well. That is the very foundation of everything he says. He’s not well. I wish him well.”

West kicked off May by letting loose and saying he’s a “free-thinker.” He proudly touted his support from President Donald Trump and said that slavery sounds “like a choice” on “TMZ Live.” It was there that West also opened up about a battle with opioid addiction.

“The thing with therapy and the overusing of opioids: People think ‘Oh, cocaine, heroin, weed, and stuff.’ No — people popping those pills, that’s affecting millions of Americans,” Williams said at the festival.

Yet while Williams was kind to Ye, folks responding to her remarks weren’t kind to her. They also gave their two cents on what’s the culprit for West’s outbursts.

“Neither is Wendy a well person,” someone tweeted. “Let’s get real here.”

“Lady needs a mirror,” another said.

“@WendyWilliams His mother passing away and father being absent is not an excuse for his behavior or for what he said!” someone posted. “There’s a lot of people that have grown up with one parent. If he’s not well why is he not getting any help? Instead, he’s going off to finish recording.”

“We all know Ye mind is gone, this is what happens when someone is not who they are and not walking in their truth,” another tweeted. “He allowed himself to get brainwashed and failed to study and know his history.”