For almost two decades, the residents who live in a predominantly African-American Greensboro neighborhood didn’t have a place to shop for food. The community tried to attract the attention of a popular grocery store, but when that plan didn’t work, they decided to open their own store.

Last year, New Economy Week reported on this Greensboro community and the people’s plan to create their own grocery supply. The publication recently reached out to the neighborhood to see how their plans were coming along.
Guilford County in North Carolina currently has 24 “food deserts.” Food deserts are defined as neighborhoods that are considered high-poverty, where at least a third of the resident live a mile or greater from the nearest grocery store. Seventeen of these 24 food deserts are in Greensboro. The 2014 report from the Committee on Food Desert Zones in North Carolina states that people who live in these food deserts are more likely to have diseases such as diabetes, obesity, and cardiovascular diseases, along with other health conditions. The report also states that “the consequences of food deserts could be enormous for public health, the economy, national security and more.”

The Northeast Greensboro community is one of the 24 food deserts. The people who live there haven’t had a grocery store in their neighborhood for about 20 years.

Winn-Dixie, the local grocery store for the community, closed in 1998. The grocery store was actually profitable, but the city was torn between supporting Winn-Dixie and other popular grocery chains, so the store closed its Phillips Avenue location. In the years that followed the Winn-Dixie closing, Northeast Greensboro residents requested the help of the city to bring a new full-service grocery to the community, but had no success. No major grocery chain was willing to invest in opening a store in a small community, because the investment wouldn’t bring about a substantial profit.

In 2012, residents of the community partnered with Fund for Democratic Communities (F4DC) members. F4DC is a Greensboro grassroots organization, and through meetings, members of the neighborhood learned that waiting for a company to bring a grocery store to their community wasn’t a requirement. The residents learned that they could open a store themselves. That’s how the Renaissance Community Co-op (RCC) was born.

James Lamar Gibson,  grew up in Greensboro and started working on the community co-op project as an F4DC contractor.

“The reason it struck a chord is because people organized for years to attract a corporate grocery store to the community and were rebuffed every time,” he says.

Gibson said that when the “spark was lit” to motivate residents of the community to build a grocery store for themselves, the idea really started to take shape. Gibson continues to work on a volunteer basis for the Renaissance Community Co-op. The Co-op will open in the building that used to be the neighborhood Winn-Dixie in May of 2016.

John Jones, who is the chairman of the board of directors for the Co-op, is also a resident of the community. In 1998, Jones retired from the 911 call center in Greensboro. The closest grocery store is two and a half miles away from his home. Jones states that there are a few corner stores in the vicinity, but most of these stores over-charge for food, which makes shopping for groceries very expensive for those who can’t make the two-mile trip to the nearest grocery store chain.

“Those types of stores have a high impact on the neighborhood…a gallon of milk will cost you $5,” he says.

Jones says he anticipates the day he and the other members of the community can get the food they need to feed their families are affordable prices.

Investing In the Co-op

The co-op initially started selling memberships to raise money. Community members could pay $100 to become member-owners. This fee afforded them voting privileges and give them the power to create a co-op they can be proud of. The RCC currently has around 630 members, and the goal is to have 1,000 residents sign up by the time the store opens its doors.

Jones confirms that the co-op has community members excited. He recalls a time during a meeting when a man stood up to express that the community members should be addressed as “owners.” The sense of pride and ownership that the project gives members of the neighborhood will likely have long-lasting positive effects. Jones shares that after the meeting, co-op organizers changed the application form from a membership application to an ownership application. The RCC also sells t-shirts that say “I own this store.”

Of course, the membership fees haven’t paid for all of the costs associated with building a grocery store. In all, the RCC needs to raise about $2.1 million, and they have about 95 percent of what they need. Loans from foundations, grassroots fundraising and city grants have helped to raise money for the co-op, and the organization needs to earn just $100,000 to meet its goal.

Now that the initial phase of fundraising is almost done, RCC is prepared to enter into the next phase of co-op development, which involves hiring employees and getting the food for the store.

Gibson states that the co-op organization has “done canvassing surveys in the neighborhood,” so that all the products in the store will be a direct reflection of what residents have requested. Now that RCC knows what types of products residents want, they have contacted the appropriate distributors. Gibson says that the overall goal is to work with as many area companies and producers as possible, from the food delivery companies to the refrigeration systems.

“RCC will have all the options of a traditional grocery store, as well as some other services residents have expressed interest in,” Jones says.

He also shares that there will be an area for healthy cooking classes for residents. Jones confirms that there will be organic food in the store as well. Organizers for RCC have seen to it that this co-op won’t look like the ones that are often in affluent neighborhoods. The prices of the food and products will reflect the fact that the co-op is in a community made up of mainly low-income Black families.

Jones shares that the hiring will reflect the community of RCC as well. He says that the co-op is hiring people from neighborhood, and that 32 jobs will be available— 15 permanent and 17 part-time. The pay will be $10 per hour (the minimum wage in North Carolina is $7.25 an hour).

The dream of a co-op in Northeast Greensboro is now becoming a reality. RCC organizers are hopeful that their hard work will show others what doing business looks like when the goal is to help the community thrive. 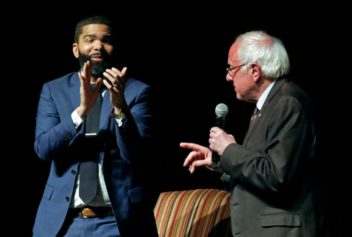