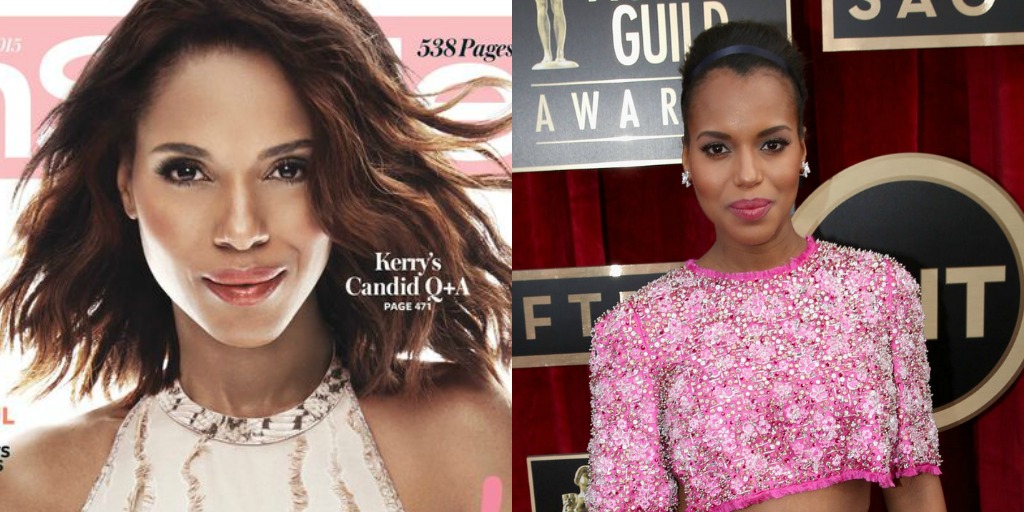 Fans were outraged recently when the reigning TV queen of problem-fixing appeared on the cover of InStyle with a dramatically lighter skin complexion. While the Scandal star took to social media to express how happy she was with the cover, her fans immediately attacked the magazine for lightening her skin. “Why would you lighten her skin that much?! She is gorgeous just the way she is!!!!” one tweet read. Another asked Washington herself if she was “really okay with this cover” before adding that she looked like a “white woman with no cheekbones.” Other online comments also suggested the magazine edited Washington’s lips and nose. The magazine staff insisted that they did not dramatically Photoshop the image but never apologized for offending readers. One would think that Nyong’o’s public position encouraging dark-skinned women to love their complexions would discourage any magazine from lightening her complexion for any spread. Unfortunately, Vanity Fair did it anyway. In January 2014, an image of the 12 Years a Slave actress was published in Vanity Fair that featured the dark-skinned actress with considerably lighter skin. The Gloss’s Julia Sonenshein accurately predicted what the magazine’s reaction to the controversy would be. “Vanity Fair will likely make the argument that it was lighting and not lightening — that is to say that instead of ordering some photoshopper to lighten Nyong’o’s skin, they’ll pretend that the light in the room blew her out,” she wrote. “In an industry where every single detail is manipulated to be perfect, it just isn’t possible that everyone fell down on the job and forgot that her skin tone was totally off. There’s just not a chance that this was an accident.”