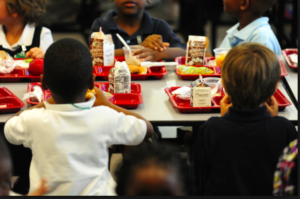 As the holidays near, most people are thinking about gifts and enjoying the time spent off of work and school with their families. Most people don’t think about the 21 million children nationwide who will go hungry because the free lunches they rely on from school are not available during the holidays.

Households with children are more likely to be “food-insecure,” which means that the families do not have the resources to provide the household with “enough food for an active, healthy life,” according to the U.S. Department of Agriculture. The USDA  has reported that 14.3 percent of all households were food-insecure in 2013, which means that almost 20 percent of households with children in the United States are food insecure.

If you figure most winter vacations last for about ten school days. On most school days an average of 32 million free or reduced lunches are given to children all over the country. So an estimated 320 million meals will be lost collectively for children in food insecure households during the break.

Food banks around the country are doing their best to make up for the gap in nutrition that these children will face over the holidays.

“A lot of our schools have breakfast—which is really great when school is in session—and, of course, lunch,” Pamela Irvine, president and CEO of the regional food bank Feeding America Southwest Virginia, told Al Jazeera America. “So when the children aren’t in school, the family suffers economically trying to provide those additional two meals every day.”

Irvine’s bank serves food to around 3,500 children in southwest Virginia during the two-week break. Each child who comes to the bank walks away with two backpacks, each one containing  a week’s worth of food.

“Families really are burdened with additional expenses,” Rhonda P. Chafin, executive director of the Second Harvest Food Bank of Northeast Tennessee, also told Al Jazeera America of the rising cost in utilities during the winter. “They’re having a hard time with rent and with utilities, because it’s that heat-and-eat time right now,” Chafin said.

Chafin said that Second Harvest has fed 5,000 more people per month this year than it did around this time last year.

“They’re just worried about their basic items, providing a holiday meal for their families,” she said. “I’m sure there’s thoughts about pine trees or presents, but they have so much to think about just when it comes to the basic necessities.”