After the third episode of Love & Hip Hop Atlanta, Mimi Faust has seen the light! The longtime girlfriend of producer Stevie J and mother to his youngest child has decided to end their relationship. Of course she has good reason, aside from his lack of respect for women and blatant dishonesty Stevie J also got breakout star Joseline Hernandez pregnant – after repeatedly denying even sleeping with her!!

That was then…this is now and Mimi is dumping Stevie J. Here’s her letter,

“Doing the show was a blessing and a curse. I’d still be in the dark and clueless had I not done it. The downside is dealing with the truth.
It hurts to find out the man u loved so much was capable of doing the most but I’ve been given the gift of clarity. My new beginning begins
My only wish is for my daughter to learn from my mistakes and know her worth and never experience what I’ve been thru. I love her sooo much
But at the end of the day a very dysfunctional relationship produced the most pure love Ive ever experienced. My daughter. So no regrets
I just want to thank all my followers for coming on this rollercoaster ride with me. I appreciate all the kind words. Seriously. Much loveTo all the women in dysfunctional relationships- don’t be embarrassed… Just learn the necessary lessons, gain strength and move forward.”

Joseline has reportedly also dumped Stevie J calling him disgusting and just her manager – who wants a “disgusting manager”???

Do you think it took Mimi Faust getting embarrassed with over 4 million viewers watching to come to her senses about Stevie J?

‘Ok Johnny Bravo’: Stevie J Shows Off His Fit Bod, But Fans Zoom In on His Legs 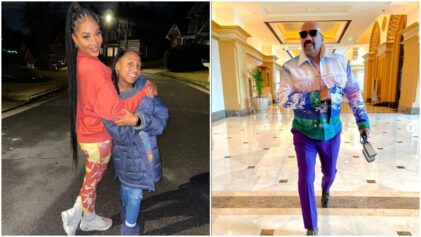 ‘It Was the Leg Kick for Me’: Mimi Faust’s Daughter Leaves Social Media In Shambles with Her Steve Harvey Impersonation