“All American,” a dramatic scripted sports series focused on the life of Spencer James, enjoyed four seasons on the CW after it debuted in 2018.

With its spinoff “All American: Homecoming,” showrunner Nkechi Okoro Carroll has taken the location of the show and dropped it on the campus of a fictional HBCU, Bringston University. This time the show is centered on a female tennis star on a Black campus versus a male wide receiver in a white school.

Actor Cory Hardrict plays Marcus Turner, a former star athlete from the school whose career in professional baseball was cut short by an injury. Now Turner serves as the assistant head baseball coach for his alma mater and helps impart life lessons to young people to prevent them from making some of the same mistakes he did.

Hardrict, in an exclusive interview with Atlanta Black Star, says that he took the role because America rarely gets to see Black men in pop culture in this capacity.

“What most excites me about Coach Marcus Turner is because we don’t see a lot of Black men like that on television,” he states. “It also emulates my real life, because I am a father and a husband. This character is a father figure to these students.”

He describes that character as a hard-nosed and tough authority figure who wants the kids that he works with to be purpose-driven.

“He doesn’t care about the flash, the glamour and everything that comes with if you get to, like, professional sports, he wants to teach principles, morals, and integrity that they can go out and just be men in this world,” he explains, adding, “That’s what I teach to my kids.”

He said that when NK (the nickname the cast gave the showrunner) called him for the role, he knew he was made for it despite never having attended college or playing organized team sports. However, he did have a teacher in high school that poured into him like he imagines his character has poured into his students.

“In high school, there was a wonderful lady named Miss Willis, and she was my high school drama teacher,” he remembered.

Miss Willis got him into acting and was the person responsible for his career.

“She told me about my first audition. It was an Oprah Winfrey movie,” the actor said. “And that’s where it all started for me 28 years ago.”

Someone else that has believed in him since they met is his wife, actress Tia Mowry-Hardrict. He said that she also is excited for him to step into this role — a role that could possibly change his life. If he has been acting for three decades, most of that has been alongside one of America’s most beloved former child stars.

He shared, “My wife has been my No. 1 supporter. We’ve been together for 21 years. So, I love my wife. She supports everything I do. She was with me from the beginning, from the days of me moving to California with like, $70, and sleeping in a studio apartment. She visited all that.”

“So, to see what we’ve grown to become, our wonderful family and how we did it from the ground up and we’re still going … that’s a blessing right there, and I give all honor to God, which is the center of our family,” He added.

The two of them have to keep those values tight, as both of them are working actors, supporting each other when one has a gig, he explained, saying, “My wife, she supports me. And she’s about to start working soon, and I’m going to support her on that. We are in this thing together.”

The 42-year-old has spent the majority of his life in love with Tia and on screen starring in all kinds of movies and television shows, including “Lincoln Heights,” “Brotherly Love,” “American Sniper” and “All Eyez on Me.” Most recently fans checked him on Lena Waithe’s “The Chi” playing a character completely opposite of Coach Turner.

Since the actor had not attended an HBCU, what experience has he had? Being a kid from the ’90s, his answer was predictable: “Freaknik.”

“I went to some HBCUs campuses when I did some interviews in the Atlanta University Center for a movie ‘Brotherly Love.’ Just looking at the vibes, the culture, the Black excellence, and all the beautiful people who wanted to do something great with their lives. That was my first time,” he said before correcting himself. “No, that was the second time.”

“The first time was the Freaknik,” Hardrict revealed, referencing a 1990s-era informal Atlanta festival of Black college life that over the years devolved into a citywide scene of chaos and debauchery.

After laughing, he said, “I was a junior in high school. I think it was like ’96. And that was crazy. That was my first time going to Atlanta.”

Hardrict said that he always wanted to be a part of that energy. The Atlanta University Center, a nexus of HBCUs that consists of Spelman College, Morehouse College, Clark Atlanta University, Morris Brown, Morehouse School of Medicine, and the Interdenominational Theological Center, claims names like Dr. Martin Luther King Jr., Stacy Abrams, and James Weldon Johnson as alums. On this show, he gets the chance to live some of that for himself.

He says, “We tried to represent HBCUs really well, and I hope we make alums from those schools proud.”

Especially now, as so many HBCUs have come under fire from a myriad of directions. Aside from the pandemic hitting the schools’ enrollment and impacting their bottom lines, over 20 schools have received bomb threats over the last two months.

Hardrict has been keeping his eye on this and says that it’s like Black people “can’t have nothing.”

He believes he knows why. With so much positive attention coming to the schools like Jackson State with Deion Sanders going over there to coach, Kamala Harris, a Howard University grad, becoming vice president, the L.A. Lakers partnering with Fisk University, and the NBA spotlighting teams like Morgan and Howard during their All-Star Weekend, people are not ready for Black excellence to be celebrated.

“I feel like it’s a threat when we start just showcasing excellence, it’s an intimidation thing,” he says. “Like, please let us have our education. Let us be great. It also shows you that the respect factor is there as well. And everyone’s paying attention. And hopefully, they catch the people who are doing this. So, we can put an end to that and continue to be great at what we do. The reality is nobody can stop us, regardless.” 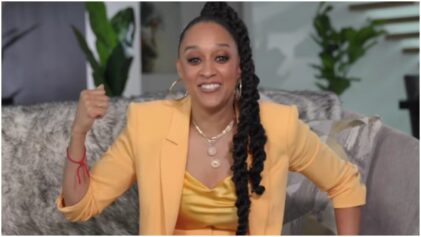 His Face Is Giving ‘I’m Doing This for My Wife’: Tia Mowry and Cory Hardrict’s Video Derails When Fans Zoom In on Hardrict’s Face