On a new episode of TV One’s “Uncensored,” Tommy Davidson is getting candid about his experience with being an adopted child.

Davidson said as a result of his adoption, “I didn’t know I was Black. I didn’t realize that I was Black until I moved to Washington, D.C.” The story begins in Mississippi, and Davidson’s adoptive mom and her husband went to do “immunization and some voting drives during the civil rights movement.”

It just so happens that the couple was working with Davidson’s birth mother and decided to visit her the next year. But the couple was told that the woman was gone and left her youngest son. “So my mother being nosy, went to this house, and when she got there it was abandoned house, kids in there using drugs.”

David’s adoptive mom proceeded to leave the house but then she saw a pile of trash, and “something told her to look under this tire that was on top of the trash. So when she moved the tire she saw my foot. So she uncovered the tire, and there I was.” Davidson said his mother recalled him being “starved” along with having “contusions” to his skull and being “in a coma.”

The now-57-year-old said he was only 18 months at the time and was hospitalized for 60 days. Since his birth mother could not be found, Davidson said his adoptive mom “took me to Fort Collins, Colorado, where I grew up until I was 5. Barbara is a white woman with a Black child in 1966.”

Fans reacted to Davidson’s heartfelt story. One said, “Wow, what a fete & story! I can’t wait to watch, always loved me some funny Tommy Davidson! 🙋🏽‍♀️🥰.” Another wrote, “God moves in mysterious ways. Thank God for his adoptive mothers intuition.”

In Washington, Davidson jump-started his career as a comedian, and after opening for some big-time artists like Patti LaBelle and Luther Vandross, he took his talents to Hollywood. He landed his first role in “Partners in Crime,” and he went on to star in the famed ’90s TV series “In Living Color” and the movies “Strictly Business,” “Bamboozled,” and “Juwanna Mann.”

Tommy Davidson’s “Uncensored” episode will air on Sept. 12 on TV One at 10 p.m. Eastern. 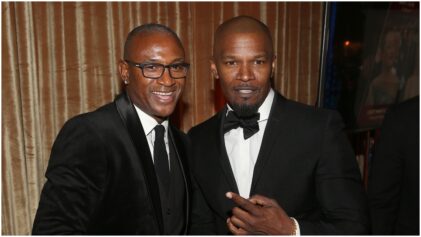