Although it’s not exactly a repeat of the Tamar Braxton saga, Loni Love is speaking out about the recent departure of another one of her ‘The Real‘ co-hosts, Amanda Seales.

With the announcement that Amanda Seales won’t be returning to the show, “The Real” seems to have a real problem keeping that fifth co-host seat filled. Love, who spilled plenty of tea about Braxton’s drama-filled exit, chatted with “The Rickey Smiley Morning Show” on Friday, June 26, about Seales leaving after just one season on the show, starting at 2:20.

“She was there for five days and she said ‘I had enough,'” Love joked. “If you know what happened with Amanda, Amanda makes it crystal clear that the co-hosts had nothing to do with it. This is a studio system. It was a studio show,” she told the hosts.

Fans who were familiar with Amanda’s outspoken, stand in your truth brand weren’t surprised that she didn’t stick around for more seasons of the light, entertainment-based show.

“Amanda was TOO REAL for the Real,” wrote a fan. “I love you guys but Amanda is my woke girl and I follow her in everything that she does.”

“Diversity is good on tv, but pointless when you are a person of color who buys into White agendas…. Loni!” another called out.

“I knew Amanda was not going to last long. She has too much to say and doesn’t play the corporate games. They hired her for her voice and tried to keep her quiet,” said a third.

“AMANDA SHOULD’VE JUST STAYED HER VOICE WAS EXACTLY WHAT THEY NEEDED. UGH IM SO UPSET SHE LEFT,” another agitated fan wrote.

The “Insecure” actress announced her departure from the talk show at the beginning of June and, in true Amanda Seales fashion, didn’t mince any words about why she chose not to renew her contract, saying “I’m not in a space where I can, as a full black woman, have my voice and my coworkers also have their voices and where the people at the top are not respecting the necessity for Black voices to be at the top too.”

‘I Can Cross My Legs Now … I Haven’t Crossed My Legs Since 1992’: Loni Love Opens Up About Her Weight Loss of 40 Pounds 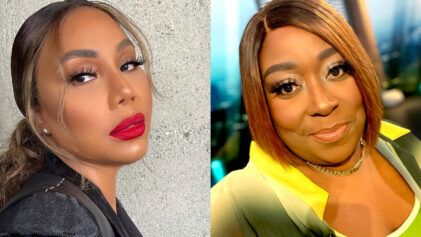