Former Boston Celtics star Paul Pierce was a guest on Matt Barnes and Stephen Jackson‘s “All The Smoke” podcast this week and went into detail about being stabbed eight times in September 2000 in a Boston nightclub.

“I’ll never forget that day,” said Pierce at around the 29:29 mark of the interview. “I was young, hanging out all the time going to the clubs. It was a night when I went into Buzz Club. I caught myself talking to some young ladies. I’m single at the time. Next thing I know, a guy approached me that’s like, ‘You don’t talk to her,’ and I’m like, ‘What?'”

Suddenly Pierce and the man began fighting. At the time, Pierce thought he was going at it with just one person, but he later found out he was fighting three people.

“Next thing you know, I’m in a tussle with him,” Pierce described. “It happened so fast, man. … I don’t even know how I got into it. … Once it was all over with, I’m standing up, I didn’t even know I was being stabbed. I look up and my jacket is ripped, blood everywhere. It’s leaking down my face. I can barely keep my eyes open.”

Pierce went to the hospital afterward and asked the medical professionals if he was going to die.

He was stabbed three times in the stomach, five times in the back, by two different knives, and was hit over the head with a bottle, which gave him a wound that required plastic surgery.

“People don’t know this, but I actually carried a gun for two years right after that,” Pierce revealed. “I was so paranoid. … I couldn’t be in crowds. … It was so bad that I couldn’t even sleep. … I had to have a 24-hour police surveillance at my house.”

For a two-year stretch after the attack, Pierce said he didn’t go anywhere during his personal time except the gym.

In 2002 a man named William Ragland was found guilty of being the ringleader in the incident and was sentenced to 7 to 10 years in prison.

Trevor Watson received one year in prison for striking and kicking Pierce, and another man named Anthony Hurston was totally acquitted. All of the men were charged with attempted murder for the attack. 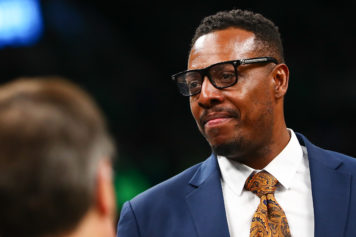