A Snapchat clip is making the rounds on social media and calling negative attention to a Las Vegas High School after a student was caught making racist remarks about Black people on video.

The clip has spawned outrage online. Among the places it has migrated to is Facebook where local politician Patsy Brown, who has a daughter who attends Palo Verde, shared the clip on Wednesday, May 15.

“It’s prom season, graduation season, flu season and this is what my daughter showed me when she came home from #paloverde high today #patsybrownlv,” Brown captioned the post.

Speaking to the Las Vegas Review-Journal the following day, Brown divulged that her daughter was stunned by the clip as the student in the video is an associate of the teen’s.

“I was confused,” Brown said. “You know, I took a moment back, because I’m still a little shaken by it because I don’t really know what to do with it. … It’s shocking to me.”

In response to the clip, the Clark County School District issued a statement to KTLV May 16 saying the following.

“A parent message was sent yesterday evening to all Palo Verde HS parents regarding the inappropriate content in the video even though it was not filmed at school,” the memo read.

Additionally, Palo Verde Principal Darren Sweikert said in a statement about the video: “Behavior like this will not be tolerated at our school nor anywhere in the Clark County School District.”

“While no direct threat has been made to our school or specific students, this kind of dialogue is unacceptable,” he went on after noting he got several voicemails on SafeVoice, Nevada schools’ anonymous reporting system, regarding the video.

“Please encourage your children to report any concerning situations or videos to SafeVoice, a school administrator, or to law enforcement instead of re-posting it on social media,” his memo concluded. “Thank you for your continued support. It is only with your help and talking with your children that we can become aware of potential concerns and take proper action to protect our campus.”

As for the potential disciplinary action against the student, it is not clear what, if any, punishment he will face. A district spokeswoman told the Review-Journal that students who engage in events that disrupt campus can be disciplined. 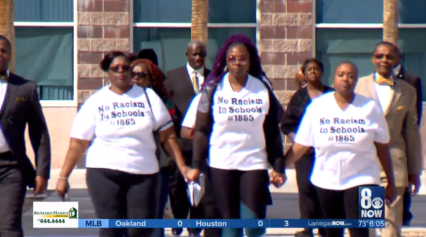