Erica Mena appears to be more grateful than ever to have her fiancé Safaree Samuels in her life.

The 31-year-old model seemed to be going through a rough time last week after learning her ex-boyfriend Cliff Dixon was killed during a shooting in Metro Atlanta. She however appears to be back in high spirits thanks to her fiancé Samuels.

The couple have been together less than a year now and they continue to bask in each other’s love. This week, Mena took to her Instagram story and thanked Samuels apparently for being a great partner in their relationship.

“Thank you for everything,” she wrote with a photo of her and her beau on vacation in Jamaica. Mena appeared to be appreciative toward her soon-to-be-husband for all he’s done, including seemingly being there for her during the loss of Dixon. 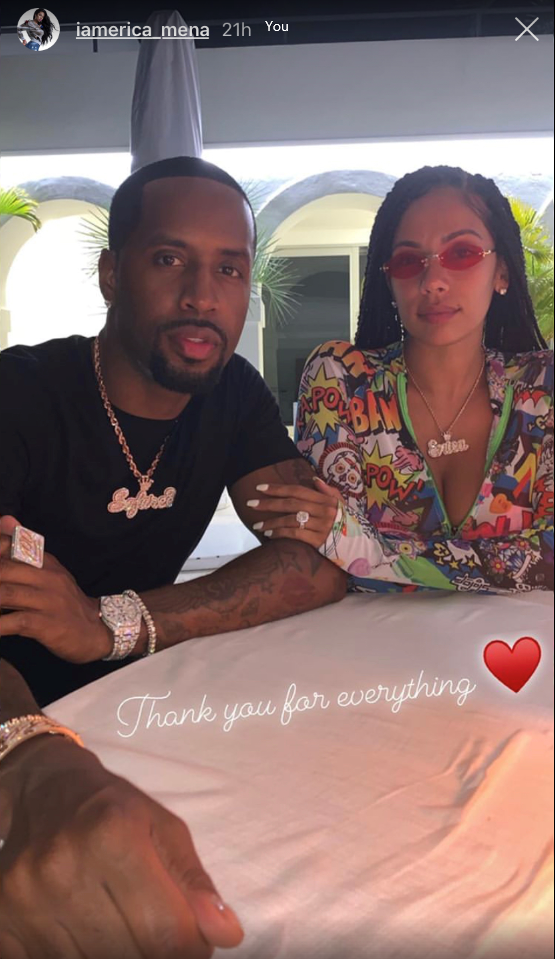 On March 21, Mena offered her thoughts after news of her ex’s death made headlines earlier that morning.

“We all deal with so much , you dealt with a lot,” she wrote on her Instagram Story March 21, along with a childhood photo of Dixon. “I’m so sorry this happened, you didn’t deserve this rest in forever peace.” The “Love and Hip Hop: Atlanta” alum and Dixon ended their relationship in 2018 on extremely bad terms. The pair were at odds earlier this year after the former Western Kentucky University basketball player accused Mena and her fiancé Samuels of “stealing” his possessions. Despite their squabble, she still sent her condolences to Dixon and his family.

Some fans commended the reality star for paying tribute to her ex-boyfriend despite having bad blood between them in the past, while others blasted her for crying crocodile tears.

“She feels guilty cuz she painted him out terrible on the internet called him a bum and all types of negative things now she wanna grieve ! Smh,” one fan commented.

Another added, “I know Erica hurt prayers up and ya’ll are the worst for blaming her for his death smh.”

“They ended on bad terms called him out on social media didn’t want to give his things back !” someone else commented. “She moved on 2.5 second got engaged n now she morning than talking bout love me while I’m alive girlll bye the shade n guilt is real .” Fans Do a 360 After Tommie Lee Uploads Revealing Lingerie Snaps