The 36-year-old mother of two shared an adorable video of her 1-year-old’s ostensibly sassy behavior caught on camera. Wright’s mother, Nita Wright, dressed baby Reign in a onesie with the words “little sister” plastered on it. Wright tried to zoom in on her daughter’s cute outfit, but her little one wasn’t having it. 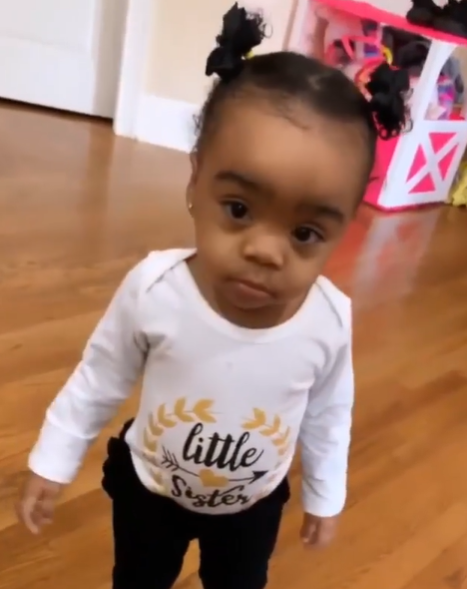 Baby Reign, who began walking a week before in her first birthday in February, tried walking around her mother, but was stopped when Wright grabbed her hand and focused the camera on the child’s bodysuit.

“Grandma dress you today?” Wright asked her 1-year-old, who was seemingly trying to ignore her.

As Wright kept prodding her daughter the little one stopped, threw her arms down, and gave her mom the pouty face.

“It’s like she’s trying to tell me to leave her alone.🤦🏽‍♀️😩 #icant,” the “Growing Up Hip Hop: Atlanta” wrote in her Instagram caption.

Wright’s fans melted over her daughter’s little display of temperament.

“I luv this little girl!” one fan exclaimed. “She was definitely saying, leave me alone momma 😍😂. She’s so cute and sassy!”

Another fan wrote, “She said ma not today! 😔 especially when she slapped her hands against her body 😂 lol. She gives me baby fever!”

“She didn’t want you to touch her😭😂,” a third fan commented. “When she threw her arms like ‘ugh look now’ I cracked up! She is a baby doll ❤️.”

Wright welcomed her daughter into the world in February 2018 with her companion Robert Rushing. She’s also the mother of 20-year-old Reginae Carter, whose father is rapper Lil Wayne. However, Wright and Rushing waited until she was around five months with child to announce her pregnancy to the world. They wanted to minimize the public’s influence on their new life, although little Reign has turned out to be very much a social media butterfly.

“Honestly, I have learned over the years to keep as much of my personal life as private as I can,” Wright told the Shade Room last year. “That being said, while I do not plan to hide her, I do plan to shield her from the negative energy that can often come from social media.”

Although it’s been a hard to keep her personal life out of the public eye, so to speak, Wright said she still wouldn’t mind having another child, although her two daughters are enough for her in the meantime.

“I would love to have a baby boy, but I think I am good with my two girls. Two is enough for me. I will just make sure she has lots of play dates.”

It’s like she’s trying to tell me to leave her alone.🤦🏽‍♀️😩 #icant