Former NBA star Gilbert Arenas has had enough of the claims levied against him by his ex Laura Govan, and he’s making some stunning accusations of his own.

Govan shared a now-deleted text thread screenshot on Instagram where Arenas wrote “Baby mommas who gives no problems gets this for xmas. Enjoy your Xmas. Heard these 2019 joints are hard to get. Hopefully, I see u with one.” It also included a photo of a 2019 AMG G63 SUV.

In response, Govan wrote a lengthy memo alleging he hadn’t seen his children since April.

“Out of respect for my Kids, I have held my tongue for years and not responded to the many attacks and false allegations you have made on my character,” she wrote on Instagram on Saturday, Dec. 22. “To know me is to know how hard I work to provide for my kids mentally, physically, spiritually and emotionally.”

“I’m with my babies all day,” she went on. “I resist the urge to respond to all of the negativity that you send my way. But today, I have to set the record straight. My kids are my life and they are the only thing we have in common. And so I’m posting this message, to reinforce the fact that everything I do is for them. Let’s redirect Your energy Not On Buying Gifts For Others But time spent with Your Children, 8 Months is a Long time With Out time spent with NO Excuse. … And since you’re in such a giving mood how about some Christmas gifts for our babies…”

She concluded by stating that the $3,000 he offers for their four children isn’t enough for the cost of living in the state of California.

“I let go of the fight and ask you to step into parenthood,” she said.

It seems Arenas would do just that if he could. But he alleged that the ex-girlfriend who slapped him with a restraining order in June, Janelle Reeves — whom he claims is Govan’s friend — set him up. Reeves had gotten a restraining order after she alleged Arenas wanted to send her son a sex tape of the former couple.

“#nochill taking over for the 99 & the 2000’s….I was trying to rise above this evil troll but she keepings pulling me back in…I haven’t seen my kids since June because Laura’s friend filed a FAKE case against me on June 5th….Laura used the fake case to keep the kids away from me while I fought it….as u can see in the court document the case was fake and it was done for a third party… ‘I wonder who the third party was🧐🤦🏾‍♂️🤦🏾‍♂️⁣’
⁣
“Phone records and recorded conversations tells us Laura was helping her friend take me down so Laura could get full custody😂😂😂 I don’t know what u were paying her but that backfired and she now owes me 🤣…..we have court in February and I will filayyyyyy her ass like usual…..⁣”

He was ultimately awarded an undisclosed amount of damages and his attorney told TMZ the claims were “meritless.” The ex-Washington Wizards shooting guard went on to address Govan’s wish that he’d give their kids Christmas presents, saying, “in 2015 she wanted the first 2 weeks of the Xmas break which she gets every year so the kids could go to Oakland and spend time with her family and if u look at her post from 2017/2016/2015 and in a few days they will all be there in Oakland on December 25th….⁣”

He said he’ll see the kids around New Year’s Day until school resumes, and that’s when they’ll get their Christmas gifts from him.
⁣
“She’s mad she spent her child support money on a trip 2 weeks ago to Big Bear…now it’s my fault she don’t have Xmas money @gailgotti didn’t u have to buy the kids Xmas gifts one year because Laura spent her child support money on #botoxfillers ,” he claimed. ”
#inreallife cut it out already just tell everyone that ur mad the nice BM is getting the new 2019 range for Xmas and ur getting the same s— evil BM’s get on Xmas… a headache from instagram stalking everyone’s page.”

Then, as promised, he posted a document showing how much child support he’s paid to her over the past three years.

“This y’all Queen???” wrote in part in the caption. “She runs around telling the world I’m a deadbeat and don’t give her any money🤔 PUTA you’ve made 1.8 million in (3 years )AND here’s the gag….through the courts I was suppose to only pay u (557,752) in those 3 years so that means I’ve given your greedy ass (1.2 million EXTRA) out of the kindness of my heart and I’m the dead beat????? All u do is hold the kids hostage for more money and when I don’t give u what u want…” 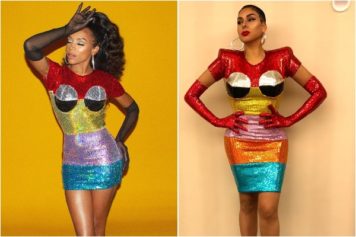