Sanaa Lathan shared a cute selfie with her dog but fans were distracted by how much her hair has grown. On Saturday, Lathan shared a photo of her small Afro and fresh face to her Instagram. In the caption she wrote, “Just rollin’ with my #BFF  #XenaWarriorPrincess #TGIF 💋.” 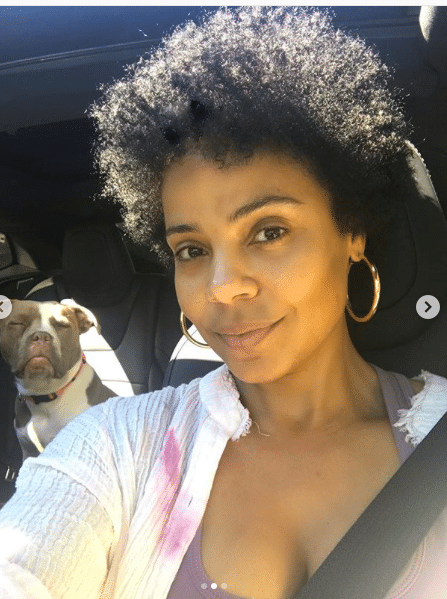 Fans were amazed by the actress’ hair growth and effortless beauty.

“Your hair is growing so fast! Can we get some more tips on your natural hair regime?”

“oh that hair is on grow! love it short or long! beautiful!”

In September 2017, Lathan went completely bald for her Netflix film “Nappily Ever After,” which was released a year later. Since the transition, Lathan has opened up about the impact it’s had on her psyche. In a recent interview with Glamour magazine, Lathan noted, “That’s the crazy thing, even despite all this, I know I’m still conditioned around beauty standards. I’ll still have days when I don’t feel pretty because I don’t have hair. I know it doesn’t make sense. I’ll start daydreaming about getting a weave, or think about putting on a wig. I actually have a bunch of wigs in my closet. I figured after I shaved my head for the show that I’d be wearing them a lot. But it’s been a year, and I haven’t once.”

While Lathan hasn’t decided to completely ditch her wigs she does have a message for other women who grapple between their natural hair and weaves, “…one of the main messages I want to get across to women is that it’s not that you should only have natural hair. It’s that natural hair is beautiful, and it should be an option.”