Mourners have thronged to the conference center in Accra, where his coffin has been since his body arrived Monday. Many attending described him as a peaceful man who dedicated himself to global security.

Annan died on Aug. 18 in Berne, Switzerland at age 80. The grandson of tribal chiefs, he was the first black African to become the U.N. leader and was awarded a Nobel Peace Prize. 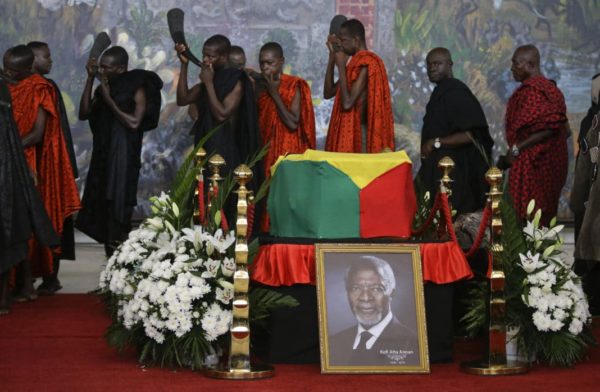 Mourners blow horns and pay their respects as the coffin of former U.N. Secretary-General Kofi Annan, draped in the Ghana flag, lies in state at the Accra International Conference Center in Ghana Wednesday, Sept. 12, 2018. Ghanaians are paying their respects to Annan, who died in August in Switzerland at age 80, ahead of Thursday’s state funeral. (AP Photo/Sunday Alamba)

On Wednesday, his family paid respects along with a large delegation of the Akwamu Traditional Council from eastern Ghana, as his mother comes from that part of the country.

The world has lost a great visionary, Emmanuel Bombande, Senior Mediation Adviser at the U.N.’s Department of Political Affairs, told The Associated Press.

“We have to celebrate him for his belief in tolerance and peaceful,” Bombande said after filing past Annan’s body Wednesday.

The Ambassador of the Islamic Republic of Iran, Nosratollah Maleki said, “Annan was not only a Ghanaian but was a global citizen who believed in peace and security.”

President Nana Addo Dankwa Afufo-Addo has ordered Ghana’s flags to fly at Half-mast as dignitaries, including the current U.N. Secretary-General Antonio Guterres, are attending. Guterres is expected to speak as well. Presidents from Zimbabwe, Ivory Coast, Liberia, Niger and Namibia are also attending, along with Graca Machal, wife of the late South African President Nelson Mandela.

A private burial will follow at the Military Cemetery, with full military honors and a 17-gun salute. South Sudan Conflict: A Test for the African Union