Tomi Lahren was made the laughing stock of social media this week after sharing a doubtful story of her alleged encounter with a drug user in San Francisco.

Apparently, the city’s drug problem has gotten so bad that people are literally snorting lines of cocaine off the street, according to the conservative commentator.

“First time in San Fran- see a man snorting cocaine off the street,” Lahren tweeted Monday. “So sad this beautiful place has become such a cesspool. Thanks for nothing, Liberals!” It wasn’t long before critics called her out, challenging her questionable story.

“You’re a liar,” comedian Michael Rappaport wrote. “…How close were you to the man snorting Cocaine off the street? Are you a drug sniffing dog? How do you know it was Coke? FAKE NEWS from the lady with the FAKE NOSE.”

Meanwhile, screenwriter Brad Wallock thought it funny that Lahren’s choice of location for the alleged drug use sounded quite similar to the original lyrics to singer Scott McKenzie’s “San Francisco.”

Lahren’s tweet not only caught the attention of celebs, but also of native San Franciscans and other Bay Area residents were wowed by her outlandish claims. Had it not been for Lahren’s close eye, folks would have no idea how pristine San Francisco’s streets actually are.

“That’s a really clean street if they are doing cocaine off it,” said a Twitter user named Kelly. “Tami, are you telling me that the streets of ‘San Fran’ are covered so heavily in cocaine that you can snort it right then and there?” another woman wrote. “How are you the first to report on this!”

National Review writer Jeff B. acknowledged that while tons of crazy stuff happens in San Francisco (including a homeless man pooping on his shoes), hobos snorting “expensive cocaine” on the streets isn’t one of them.

Amid the mocking, Lahren defended herself in another tweet about San Francisco.

“Love when you clowns try to insist there isn’t a homeless or drug problem in SF! Yep. Sure,” she shot back. 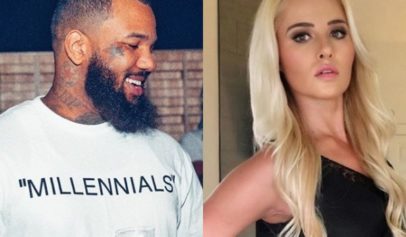