Justin McClure (left) claimed the tweets were from his old Twitter page where he promoted his stand-up comedy. (Image courtesy of Instagram)

The father of YouTube’s famous McClure Twins is in hot water after a series of outwardly racist and stereotypical tweets were dug up from his old Twitter account this week.

Justin McClure, who is white, shares bi-racial twin daughters with his Nigerian wife, Ami Dunn McClure, and together, the interracial couple made a name for themselves by posting cute, whimsical videos of their daughters, Ava and Alexis, to YouTube. The family of five (the couple recently welcomed a third child) quickly solidified themselves as an Internet sensation.

McClure tried to delete the posts, but not before users took screenshots of the evidence.

They’re deleted, but I saw these online pic.twitter.com/i43r4Ge47Z

The twins’ dad also left behind a cringe-worthy blog post about interracial dating, suggesting that “FUBU and piñatas” are all it takes to attract Black and Latina women. He also claimed that while white guys are busy thinking about TED talks and buying books off of Amazon, Black and Latino guys are on the corner lifting weights or trying to sell their mixtapes.

“White guys are typically more cautious, laid back, and considerate of women,” he wrote. “White guys might see a hot black girl at a bar or something, but talk themselves out of approaching because Anderson Cooper comes on in 30 minutes. They have to get home. Black and Spanish men lifting weights on the corner don’t even know who Anderson Cooper is, but they hope he buys their new mix tape.”

“White guys don’t make the moves in person,” the post continued. “So Caucasian guys if you want to date a black girl or curvy Spanish chick, get online. Send some e-mails. Talk about how you love piñatas and Fubu, whatever it takes.”

In an effort to quell the outrage, McClure claimed the offensive tweets were from an old “comedy page” of his that was converted to the family’s main page. He blamed his past antics on alcoholism and being a “womanizer” at the time, but stopped short of issuing a real apology.

Insensitive…yes, from a very insecure man (at the time). I’ve talked publicly about how I said irreverent things for attention. I was a drunk and a womanizer (then)…it’s well documented that sobriety changed my attitude, and Ami change my life (i didn’t know her then)

The paltry explanation was of no consolation to critics who pointed out that his mixed race daughters were already born at the time he authored the racist tweets.

But see…your kids were already born by this tweet so had you not met their mother yet or did you have to talk her out of naming them Allergies or how exactly did that work? pic.twitter.com/QAQHuoKtvs

Imagine getting married to a beautiful Black woman and having Three beautiful kids to be a racist, misogynistic, ignorant POS (YES ITS A THREAD): FATHER of @McClureTwins (get ready you’re about to CANCELLED even more 🙂 pic.twitter.com/D0yRxzDwKv 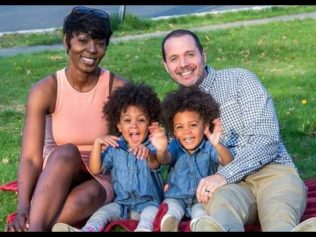