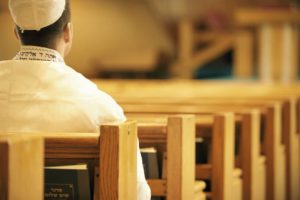 Elad Nehorai likened some of the comments spewed by fellow Jews to remarks made by alt-right leaders. (Photo by Rib Melnychuck/Getty Images)

There has been an alarming rise in the embrace of white supremacist rhetoric and ideology among some members of the Orthodox Jewish community, Jewish anti-racism activist Elad Nehorai warns.

Nehorai, who rallies against racism through his organization Torah Trumps Hate, said he has seen an increasing number of comments from members in his community that go a step beyond everyday racial prejudice, but instead suggest a real commitment to white nationalist ideology.

In an op-ed published in Jewish newspaper Forward, the activist wrote that “the philosophy of white nationalism that justifies racism” is one “… the Trump era is increasingly bringing into stark relief.”

“It’s spreading like a virus among many Orthodox Jews,” he added.

Just weeks ago, Nehorai said he was shocked to see some of his fellow Orthodox Jews supporting President Donald Trump’s controversial comments calling Africa and largely Black nations “shithole” countries. He said some of them even defended the president’s unwillingness to accept immigrants from these countries, saying some of the comments could be compared to those of former KKK leader David Duke and even Trump himself.

“What I learned from Trump’s ‘shithole’ comment was that the president’s dog whistles aren’t being heard by only the ‘alt-right’ anymore,” Nehorai wrote. “…Despite concerns about Trump’s ‘crass’ wording, far too many Orthodox Jews agreed with the content.”

“Was it the majority of the Orthodox world. Doubtful. But was it a portion large enough to be concerned about. Absolutely,” he added.

Nehorai doesn’t necessarily place blame on alt-right leaders like Duke and Richard Spencer for influencing racist ideologies among some Jews but rather points the finger at right-wing Jewish commentators like Ben Shapiro and Breitbart editor Joel Pollack. It is these pundits, he said, that have an “enormous” impact on the right-wing Orthodox community.

“My fellow Orthodox Jews must reject hate, and guard against the dangers of racism, bigotry, and other white nationalist tendencies,” he concluded. “We lose our Jewish soul if we embrace hate.”