H&M protestors joined the EFF party in South Africa. The store in the video is the Johannesburg store that had 24hrs to close down before they ransacked it. This isn’t the only store that was visited by protest groups. In some locations when protestors were asked to leave they left peacefully, some apologized. In all cases there were no reports of stealing or looting! *swipe left*

South Africans are currently unable to shop at H&M after the Swedish retailer has closed the storefronts. The 17 locations were temporarily closed after protesters trashed a Gauteng Mall location in reaction to a racist advertisement.

H&M was launched into controversy last week when a Black boy modeling a hoodie incited accusations of racism. The apparel, which has since been pulled from H&M websites worldwide, read, “Coolest Monkey In the Jungle.”

“We are here to just remind them that the monkeys own this place,” Donald Mabunda of EEF told Jacaranda FM. “We are here to inform them: if you want to undermine the Black people in this country, these are the results.”

H&M has since released a statement regarding the protests, saying it is “aware of the recent events inside several of our South African stores.”

“What matters most to us is the safety of our employees and customers,” the statement continued. “We have temporarily closed our stores in South Africa. None of our staff or customers have been injured. We continue to monitor the situation closely and will open the stores as soon as the situation is safe again.

After denouncing racism and bias yet again, the store said, “We stress that our wonderful store staff had nothing to do with our poorly judged product and image.”

Meanwhile, EEF’s Twitter page also made it clear that nothing had been stolen from any H&M stores.

What is left out in the entire public narrative on #EFFprotest against H&M anti-black racism is that Not Even A Single Item was Stolen or Looted by EFF Ground Forces. How much more peaceful and orderly can a protest be? #Asijiki 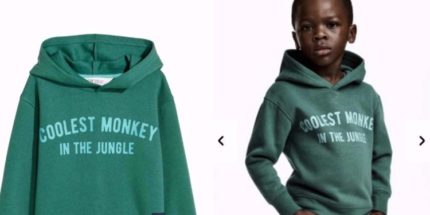 As People Zero In On Mother of Boy In H&M Hoodie, There’s More To The Story