“When Love Kills: The Falicia Blakely Story” trended all night when it premiered Aug. 28 and with good reason. The film, another venture into original movies by TV One, was a big gamble, but it paid off huge by becoming the highest-rated premiere in the network’s history.

Rapper Niatia “Lil Mama” Kirkland stars as Falicia Blakely, a teenage girl in Atlanta who got caught up in stripping which led to her meeting an older man, played by Lance Gross. That relationship resulted in domestic abuse, prostitution and crime. Currently, Blakely is serving life sentences for three murders she committed in 2002.

Plucked from an episode featured on the network’s successful “For My Man” series, “When Love Kills” delves deeper into the psychological life of Blakely, zoning in on the emotionally neglected young girl’s tragic need to be loved. That struck a strong chord on social media, resulting in “When Love Kills” trending all night, for 7.5 hours to be precise, reaching No. 1 nationally at one point and ranking No. 2 overall on the Nielsen Social Daily Top Five List.

Following a promotional screening in Atlanta a couple of weeks before the film aired, Tia Smith, Senior Director of Original Programming for TV One, who oversees “For My Man,” said, “I was just haunted by the story. I think it was because she was just so young. Sixteen years old and being caught up in that situation.”

Have You Seen the ‘The Rickey Smiley Show’?

And Who Can Forget ‘R&B Divas’?

As TV One looked to mine gold similar to last year’s “Love Under New Management: The Miki Howard Story,” Smith championed Blakely’s story.

Enter writer/producer Cas Sigers-Beedles. Unbeknownst to Smith, who worked with her on the “Girlfriends’ Getaway” films for TV One, Sigers-Beedles had written a script a decade ago and even visited Blakely in prison but never could get the film made. Like Smith, Sigers-Beedles couldn’t shake Blakely’s story.

“Over 60 percent of the women in prison are in there because of a man,” Sigers-Beedles said via telephone. “Falicia connected to the wrong thing. She connected to the first person who said he loved her.”

That love came at a huge price, of course. And once that love began to lose its hold, Michael Berry, who is the basis for Dino in the film, resorted to intimidation. For example, Berry was holding Blakely’s son [who is depicted as a girl in the film] hostage at the time Blakely, accompanied by her friend Ameshia Ervin, committed the murders. But Berry was never charged.

“When I sat down with Falicia, her whole thing was, ‘I really don’t want people to think I’m a monster’ and she was 19 at the time and really young in the mind,” recalled Sigers-Beedles. “Even though she was 19, it was really as though she was 14 and I felt like, at the time, it was such a young girl’s tragic love story.”

Humanizing a young woman who kills three men is no small feat, but Blakely’s story was larger than her crimes. “Everyone can’t relate to [committing] triple homicide, but everyone can relate to going too deep in a relationship,” Sigers-Beedles said of their attempt to make “When Love Kills” a grander cautionary tale.

Tasha Smith proved to be the perfect complement as director. “Tasha had had experience in the streets. She had a very, very hard upbringing. She had a brief stint at the strip club, so she just connected to this character so much and then, on top of that, her being a phenomenal acting coach” all played a role Sigers-Beedles said.

Kirkland was especially appreciative of Tasha Smith’s direction. “To tell this story and to take direction from Tasha as far as just being honest, not judging the character, I learned so much about being an actress,” she said after the Atlanta promo screening.

“I had to allow myself to be super vulnerable and do what I know happens when it’s real. And most times when it’s real, we do look stupid,” she shared.

To that end, Lance Gross’s good looks were essential. “I was glad that Lance got the role of Dino,” Kirkland said, “because girls won’t say ‘Well, his ugly ass won’t be whooping my ass.’” 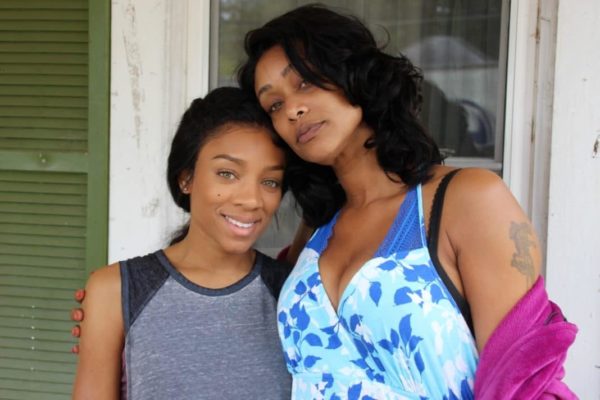 Tami Roman, who is best known for the reality show “Basketball Wives,” is also quite effective as Falicia’s neglectful mother, Stacey. “I think that Stacey is complex in a way that is very familiar to a lot of households,” she said following the same promo screening. “You’re young, you get pregnant. You have to make decisions for someone else’s life when you don’t even know what you’re doing with your own. And, all of a sudden, you’re lost and then there’s this dichotomy that you end up searching for something that you’re incapable of giving.

“Sometimes, as parents, we rest on our laurels and say, ‘Well, I’m doing the best I can. I’m holding on. I’m trying to make it through,”  she continued. “Sometimes, your best isn’t your best. You’re just getting by as a parent.”

For Kirkland, the message of “When Love Kills” comes at a critical time. “The streets move so fast and you have to stop and think about where you are and make certain choices,” she explained. “We’re at a time right now where exotic dancing is super glorified and that’s okay, too.

“But, I think that it’s also important to show the other side.”

“When Love Kills: The Falicia Blakely Story” airs again on TV One Aug. 31 and Sept. 4 at 10 p.m. ET and is available On Demand.