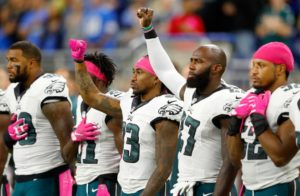 After raising his fist for all but one game last season, Philadelphia Eagles safety Malcolm Jenkins vowed to continue to make the gesture in protest of the national anthem this year.

“Last season, I raised my fist as a sign of solidarity to support people, especially people of color, who were and are still unjustly losing their lives at the hands of officers with little to no consequence,” Jenkins told ESPN in a statement Thursday, Aug. 10, after raising his fist ahead of the preseason opener against Green Bay. “After spending time with police officers on ride-alongs, meeting with politicians on the state and federal level and grassroots organizations fighting for human rights, it’s clear that our criminal justice system is still crippling communities of color through mass incarceration.

“As the blowback against those who stand up for what is right thickens, I feel it is necessary to push forward with a relentless determination. I want to send a message that we will not easily be moved or deterred from fighting for justice. There are many players across the league who have joined me in working toward new legislation and re-establishing trust and opportunities in our communities, and you can expect to see much more of that. … I want to challenge those who stay silent to be courageous and use your platforms to become part of the solution. God Bless.”

Jenkins made waves in September when he led his Eagles teammates in protesting “The Star-Spangled Banner,” which followed free-agent quarterback Colin Kaepernick’s demonstration against Black oppression that began a month earlier. Jenkins continued his protest all season, pausing only during a Sept. 11 game against the Cleveland Browns out of “great respect for the police and military.”

The athlete didn’t simply protest on the field and expect change to happen, however. Jenkins mobilized with other NFL players in March to push Congress for legislative reforms to stymie police violence against Black people.