Some wished Michelle Obama wore her hair natural while she was the first lady. (Gage Skidmore/Flickr)

Former First Lady Michelle Obama has the Internet in a tizzy over a photo of her sporting her natural coils on vacation. Now, her hairstylist confirms it’s the real deal and it has been since the first year of her stay in the White House.

“That picture is recent!” Johnny Wright told Refinery29. “She just got back from vacation, I think, on Friday. I’m not sure if it was her going to the airport or coming back. But that is her, and it is recent.”

The image showing Obama wearing sunglasses, small hoop earrings and a headband seemed to have been snapped in the French Polynesian Islands, where her former president husband Barack Obama jetted off to in March, according to Agence France-Presse.

This is the picuture I have been waiting on for like 3 years. COME ON NATURAL. pic.twitter.com/HF8AYpsciB

“She was actually blown straight before she left for vacation,” Wright told Refinery 29. “I guess she got in the water or something, and she didn’t feel like straightening it herself! People want a more sexy answer, but that’s really what it is.”

When the image initially surfaced, many applauded Obama’s embrace of her natural texture.

@meagnacarta She’s living life and I’m all the way for it lol. pic.twitter.com/s2mQr1sgiH

Wright said Obama was actually natural for the majority of President Obama’s tenure.

“I stopped doing her relaxer the first year of the administration,” he said. “Very shortly after that, her hair grew out completely. She has no relaxer anywhere on her hair, not even on the tips.”

There was no big chop for Obama’s transition from relaxed to natural hair. Instead, Wright paid special attention to the first lady’s tresses and gave her periodic trims.

“I’m very particular about the health of her hair,” he said. “I’ve always called myself a texture specialist, and I work well with keeping hair on the head. When your natural hair is growing out, that line of demarcation between the natural hair and your relaxer tends to break and pop. I made sure I kept it very soft and moisturized so she could keep her length as much as she could when she was going through that transition. I trimmed every four to six weeks, as I normally do, and that was it.”

For critics who question why Obama didn’t sport her textured hair while her husband worked in the Oval Office, Wright said she has “always embraced her natural hair.”

“For the looks she was going for and the stories she wanted to tell, I styled her hair straight. There wasn’t any lack of embracing her curls. It’s just what she wanted to do.”

Wright added that Obama became an inspiration for other Black women to love their hair the way it grows out of their scalps.

“I do think that a woman of her complexion, with her figure and her hair texture, has given a whole lot of other women a chance to look in the mirror and say ‘I am beautiful, too’ because I have somebody representing me,” he said. 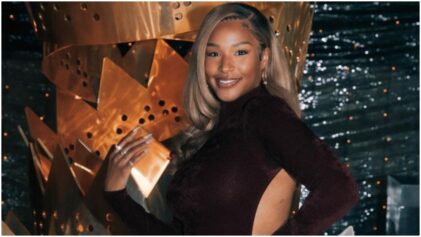