Sheriff David Clarke lashed out at the University of New Haven Tuesday after he claimed it removed his lecture offer based on his thoughts about Black Lives Matter.

In a blog post written on Pathos, Clarke discussed the Connecticut college’s change of mind. He wrote he accepted an offer to be the keynote speaker on a forensics discussion in June.

After planning the trip, Clarke said his assistant spoke to senior lecturer Patrick Malloy on Aug. 3. The Wisconsin sheriff said Malloy felt “extremely apologetic and embarrassed ” about taking back the offer.

“Apparently, the higher-ups did not want me to speak on campus due to my remarks about #BlackLivesMatter,” he wrote on his Oct. 5 blog. “I’m not sure what specific remarks drove them to uninvite me, but anyone who listens to me for five seconds knows I prefer to drop the ‘v’ and call them #BlackLIESMatter. They terrorize the police, lie about their true mission, promote anarchy like the old Black Liberation Army, and released a list of ‘demands’ that included releasing known cop killers.”

The Milwaukee County officer’s past criticisms of BLM includes a belief that the organization is racist. He also said it uses “vicious rhetoric” to promote anti-police attitudes.

After Clarke shared his initial blog, a student at UNH created a petition urging the school to apologize and allow the sheriff to give a lecture. It currently has 2,750 of 5,000 signatures.

Then, Clarke dismissed the message in a separate Pathos blog.

“President Steven H. Kaplan, I understand why you don’t want people to know that a predominantly white college won’t let a Black man speak on campus because of your incredible support for minorities,” he wrote. “Own it as a ‘decision’ the university made… not that I was a victim of circumstances.

But a school spokesperson told the Milwaukee Journal Sentinel Thursday that Clarke made impossible demands on the 25-year-old police training program.

“He asked for things that we just couldn’t do,” Karen Grava said. “We work hard to keep the cost down.”

UNH administrators said although he did not request payment for the lecture, the sheriff demanded expensive travel arrangements. They included a first-class airline ticket and a presidential hotel suite.

“The decision to not extend an invitation to Sheriff Clarke was based on these requests, which the University could not accommodate,” Grava said in a statement to the Journal Sentinel. “Should the appropriate occasion arise in the future, we would consider inviting him to campus.”

Grava also said an offer was never officially given to Clarke but that UNH had mulled the idea over. Officials also said there was no signed contract or agreement between the school and the sheriff.

Clarke did not respond to Grava’s remarks but maintained in an email to the newspaper that Malloy promised the school would pay for all of his travel costs. 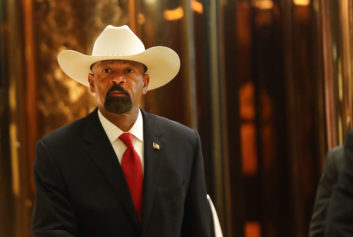