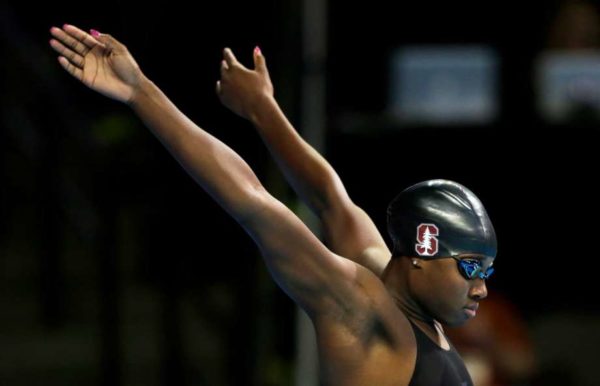 NBC reported Manuel was No. 1 in the women’s 100-meter freestyle semifinal. She clocked in at 53.11 seconds. The Stanford University student qualified for the semifinal Wednesday afternoon in the women’s 100-meter heat. Manuel won her heat in 53.32 seconds. She came in second place behind Australia’s Cate Campbell, who clocked in at 52.78 seconds. The Sugar Land, Texas native missed Campbell’s world record by 0.54 seconds.

Manuel’s first-place position was largely passed over on-air. The network tweeted out her finish after it happened, but Black Twitter was disappointed at the lack of acknowledgment by analysts.

Katisha Williams pointed out the Campbells’ apparent importance over Manuel, who was not interviewed after the race.

But yet @NBCOlympics too busy talking about the Australians… Congrats @simone_manuel ?? https://t.co/EIO1MAlqAr

Then, users decided to celebrate Manuel’s accomplishment themselves.

Annesha Sudu expressed the pride of the Black community.

@simone_manuel THEY didn't give u the highlight u deserved after ur win but WE r proud! ❤️ #SimoneManuel #Rio2016 pic.twitter.com/RNIIssnfQl

@TheRealRamonabd also shared her love. She encouraged the swimmer to rest up for her competition tonight. Manuel will compete in the women’s 100-meter freestyle final after 10 p.m. The women’s 50-meter freestyle will follow Friday afternoon.

That's alright, she gonna shock the world tomorrow! We ❤️ you @simone_manuel Get your rest.. It's time to make GOLD https://t.co/xiqtMMl7Qn

Liv. remarked at Manuel smashing the stereotype of Black people not knowing how to swim.

Aside from her win last night, Manuel also took the silver medal in the women’s 400-meter freestyle relay last weekend. Competing with American teammates – Abbey Weitzeil, Dana Vollmer and Katie Ledecky – Manuel gave the U.S. a head start with her 53.36-second lead-off leg. Ultimately, the Campbell sisters and the Australians won the match in 3:30.65. Team USA came second with 3:31.89.