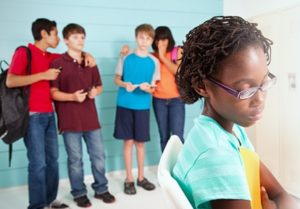 Gone are the days when good-natured teasing and a safe but comfortable social awkwardness were just a part of growing up. Most people can remember being teased by their friends and classmates for being taller or shorter than everyone in the class at some point. Some people recall being bullied after having to get braces or glasses. And of course, there was always a bully or two in every school who stole lunch money from smaller, weaker children and basically took pleasure in intimidating those who were too scared to fight back.

While it’s true that some of these bullying situations went further than they should have, cyber bullying has taken harassment and criticism to an overwhelmingly new level for today’s school-aged children and teenagers. To make things worse, Black and brown children are more likely to experience and exhibit bullying. This is likely due to the growing (and ever present) racial tension in the U.S., as well as the messages of self-hate that are rampant in many communities of color.

The “Go Home” campaign is proof that racial bullying is very real, even for young children. The campaign essentially revealed that many people in the U.S. feel that immigrants have no place here, even though the country as we know it was built by people who are not native to this part of the world. ChildLine, a children’s charity, reported that in 2013, more than 1,400 children experienced racist bullying and sought counseling as a result. This is a 69 percent increase from the previous year. Due to media portrayals, and likely as a result of conversations children hear in their homes, labels such as “freshies” have been given to Black and brown children who don’t speak fluent English. Children from Somalia are also referred to as pirates, due to the film Captain Phillips, in which Somali men were portrayed as pirates. Unfortunately, some African-American children participate in this form of bullying, perhaps oblivious to the fact that they are targets for racial and social harassment as well.

The days when teachers were quick to put a stop to this type of treatment are also a thing of the past. ChildLine reports that the majority of children who complained about racial abuse told their teachers, but the teachers either ignored the problem or ineffectively resolved the issue.

Aside from racial bullying of students of color who are new immigrants, Black children who were born in this country face bullying if they are not fully immersed in the sub-culture that is inspired by music videos and televised criminal re-enactments. CTPost.com reports that a student in Ansonia, Connecticut, was bullied by members of his predominately Black class for being Latino. As the lightest-skinned child in the class, he was called derogatory names, and was even stabbed in the back with a mechanical pencil. A study conducted by the U.S. Department of Justice in 2011 revealed that 54 percent of Asian students, 38.4 percent of Black students and 34.3 percent of Hispanic students experienced classroom bullying, as opposed to 31.3 percent of white students. Michelle Pincince, a program director for the Connecticut Anti-Defamation League, stated that bullying is prevalent whether a child is from the inner city or the suburbs. This is not good news for parents who intentionally move to more affluent neighborhoods to escape the possibility of bullying for their children.

Because students can bully one another via social media, the harassment doesn’t stop once a child has left school for the day. This is another major change in bullying and teasing that has become glaringly clear in the digital age. The disparaging comments, false accusations and inflammatory descriptions that some children constantly read about themselves online have proven to be too much to cope with, and some have ended their own lives because of it. For instance, a 7-year-old Black boy in Detroit hanged himself with a belt from his bunk bed due to being bullied. This is a tragic testament to the fact that bullying is affecting children when they are most innocent and impressionable, and may not have the tools to fight back.

Due to the growing number of students who are bullied in person and online, more parents have started taking legal action to prevent this. Parents are encouraged to contact their child’s school for a copy of the school’s policy on bullying. It is also imperative to document every bullying incident, so the police can use the evidence if need be. A commitment to displaying tolerant and kind behavior to children, regardless of age, can also have a positive, long-term effect on ending bullying.

2 thoughts on “The New Age of Bullying: Cyber and In-Person Harassment and Black Children” SWV Singer’s Son Alleged Victim of Racist Bullying in School: ‘This Will Not be Tolerated!’