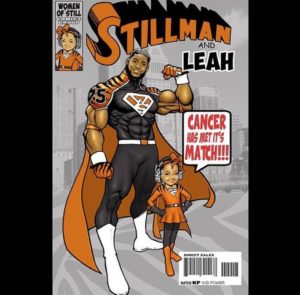 Devon Still of the Cincinnati Bengals has been open about his 4-year-old daughter’s battle with Stage 4 cancer that threatens her life. She underwent surgery to remove the tumor Friday, and her dad posted this video of them on the way to the hospital for the surgery.

Leah was diagnosed with neuroblastoma June 2, after Still took her to the hospital when she complained of pain in a hip. The pediatric cancer left her with a 50-50 chance of survival. The surgery removed the tumor, but the cancer had already spread to the marrow, so more treatment is necessary.

When she woke up from surgery on Friday, she told Still, who slept in the bed next to her: “Daddy, the docs said I was a big winner.”

Leah will have another round of chemotherapy, radiation and stem-cell transplants in an effort to regenerate her bone marrow and stem cells. Still and his family also are awaiting the day when doctors tell them Leah is completely cancer-free.

Fans have offered widespread support by buying Still’s jersey to generate more than $1 million for the Cincinnati Children’s Hospital Medical Center. The Bengals will absorb the cost of the first 10,000 jerseys, which has almost already been reached.

“We applaud Devon for his openness in sharing his daughter’s challenging story nationwide through media and social media,” Bengals executive vice president Katie Blackburn said in a press release.

Still said her bills could cost $1 million. The league will take care of all of that.

Earlier this month, Still acknowledged that his mind wasn’t 100 percent on football during the preseason and training camp. A hamstring injury also sidelined him near the end of the preseason, forcing the Bengals into cutting him when they needed to reach their 53-man roster limit. A day after that, the former second-round draft pick was added to the practice squad. Two weeks ago, he was activated off the practice squad and played in place of injured tackle Brandon Thompson.