Even before the first scene was shot for Nina, the biopic of the late jazz musician and classical pianist Nina Simone,  the film faced harsh criticism for the casting of actress Zoe Saldana in the lead role. There is even a petition on Change.org calling for the boycott of the film.

The controversy over this casting is still at a fever pitch because Nina Simone was dark-skinned with broad features — and Saldana is not.  The singer was known for speaking out against colorism, the practice of favoring lighter-skinned Blacks over darker ones. So many critics are outraged that Saldana, a Latina actress who has wavered about her Black racial identity — won the role.

In light of the Zoe Saldana-Nina Simone controversy, there are other questionable casting decisions that deserve their fair share of scrutiny.  Here are five of them. 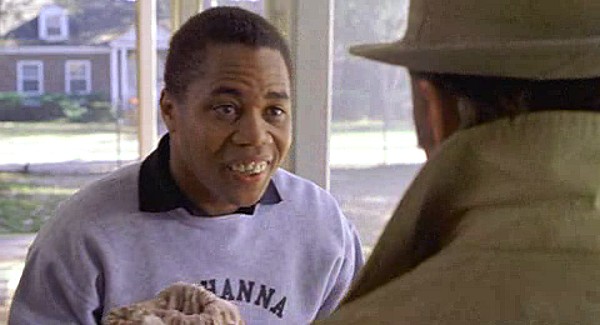 Once a promising A-lister, Gooding has nosedived into the D-lister territory. The “Oscar curse” may be to blame, or it could be bad career choices such as the films Boat Trip, Snow Dogs, Chill Factor, and Radio.

In Radio, the award-winning actor chose to do the exact career-ending act Tropic Thunder character Kirk Lazarus (Robert Downey Jr.) advised all actors not to do: “go full retard.”

At the time of the film’s release, Mick LaSalle of the San Francisco Chronicle criticized Gooding’s performance, saying “In Radio, Cuba Gooding Jr. falls victim to the Nell syndrome, in which a vibrant, loquacious actor decides that the road to an Oscar nomination is to wear a slack expression and a set of Nutty Professor teeth.”