K. Michelle’s debut album “Rebellious Soul” may not have earned her a Grammy nomination, but it has earned her a new partnership with actor Idris Elba who is expected to direct a musical inspired by the album.

The feisty reality star has constantly been reminding her fans just how much of her own personal life she poured into her album, and now she’s ready to take those stories to a new level.

Rumors of the partnership began to swirl when K. Michelle appeared on WGCI’s “The Morning Riot” and dished on more details about the upcoming musical.

“I turned the whole album around, Idris heard it,” she said. “And we decided to team up on it.”

Of course, the home of her reality show “Love and Hip Hop” has gotten behind the musical. VH1 will air the musical as soon as they are given a finished product.

K. Michelle also revealed that she didn’t want to make the production about celebrity. Instead she just wanted to create a genuine, emotional musical that anyone would be able to enjoy – not just fans of reality TV who want to see what she has been up to.

“I didn’t want to make it this celebrity thing,” she said. “Me and him decided we really wanted it to be focused on the story and fun and laugh and cry.” 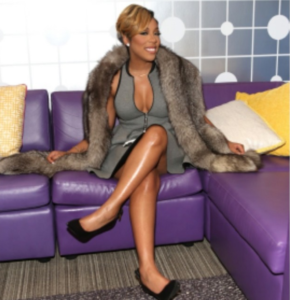 The sad news is, Idris won’t be bringing his sexy accent and fine physique to the musical.

His role will be behind the camera as director for the project, which is no new task for the Golden Globe winner.

Idris has a number of other artistic talents including deejaying, and he has already directed a music video for Mumford and Sons’ “Love of the Light.”

As for the curvy songstress, she will be making her first big acting debut.

“People have been talking to me about a lot of acting roles, but this will be my first time being on the screen,” she admitted.

As of Friday morning, neither VH1 nor Idris Elba have publicly commented on the musical project and no official release date has been announced.

One thought on “K. Michelle Teams Up With Idris Elba For ‘Rebellious Soul’ Musical”