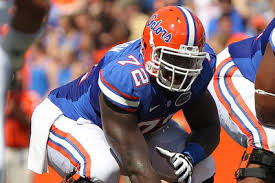 More than a month after he was ejected in the Oct. 5 game against Arkansas, Florida center Jon Harrison claims he was pummeled by racial slurs from an unnamed Razorback.

Explaining to reporters that he did not poke an official in the chest as alleged and causing his ejection from that game, Harrison said he was telling the referee that he was fed up with racial insults directed at him.

“What happened was, one play I got face-masked, then the next play I got called every version of the ‘N-word’ known to man,” Harrison said to 247Sports affiliate, GatorBait.net. “And I went up to the ref and I’m like, ‘Ref, please, you have to control this player. He’s been calling me every racial slur.'”

In the process of pleading with the referee, Harrison said he made contact with him, which is an automatic ejection.

“I talk with my hands as you guys probably have seen this whole time and I touched the ref in his chest,” he said. “I didn’t poke him, but I was talking like this.” He waved his hands to illustrate.

“I was honestly was just trying to tell the ref to get this player because I was getting attacked, I felt like I was getting harassed, and it was beyond football,” Harrison said. “Calling me the N-word and everything is not football anymore.”

Harrison declined to name the player and no other players have come forward to say they heard the remarks, making it unlikely there will be an investigation by the SEC.