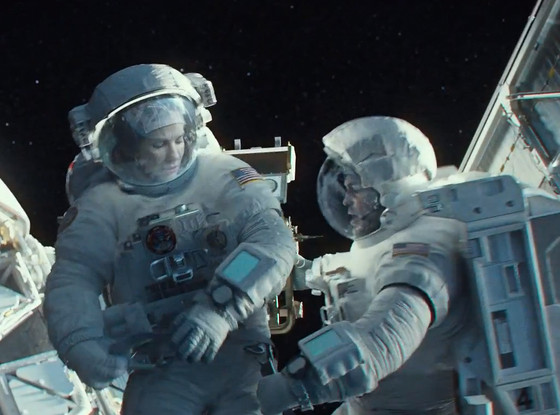 Alfonso Cuaron’s sci-fi thriller, Gravity, which stars Sandra Bullock and George Clooney as a pair of astronauts stranded in space and trying to find their way home, hit the theaters this week.

The film has already earned $1.4 million in Thursday showings, and if audiences agree with the critics — who probably made this the best reviewed film of the year — it should be set for a $40 million debut this weekend

In the movie Bullock stars as Dr. Ryan Stone, a medical engineer who travels to space with Clooney’s Matt Kowalski, a veteran astronaut. When an accident destroys the tether to their space shuttle, the two astronauts are left drifting in space. With time and air running out, they must figure out a way to save themselves from the harsh cold blackness of space.

Since the movie’s premiere at the Venice Film Festival in August, it has earned nearly universal praise for its immersive visuals and down-to-earth performances. The latest round of Gravity reviews seem to follow the suit. The film arrives in U.S. theaters on Friday.

Here’s what the critics had to say:

The Boston Globe‘s Ty Burr writes: “It appears there’s nothing Cuarón can’t do. Now he has made an astonishingly detailed, visually painstaking state-of-the-art production that advances what the cinema can show us — even as the human story at its center feels a little thin after a while.”

It makes for “an eminently satisfying night at the movies,” even if, “as the film leapfrogs from one deserted space station to the next, it becomes a straightforward chain of obstacles to confront and surmount.”

L.A.Times’  Kenneth Turan says: “‘Gravity’ is out of this world. Words can do little to convey the visual astonishment this space opera creates.” He adds: “Though the strong work of Sandra Bullock and George Clooney … is essential to what the film accomplishes, the great lure of ‘Gravity’ is the way director Alfonso Cuarón, cinematographer Emmanuel Lubezki and visual effects supervisor Tim Webber have collaborated to make us feel we’re stranded in outer space ourselves, no questions asked.”

Although the core of the film “is pure genre down to the workmanlike nature of chunks of its dialogue, it makes the most of that situation by having a formidable narrative drive, a plot smartly worked out to the smallest, most persuasive detail, and an intense, immersive score and sound design by composer Steven Price.”

The New York Times’ A.O. Scott says:  “All of it — terrifyingly and marvelously — evades summary and confounds expectations. You have to see it to believe it.” The technical accomplishment extends to the use of 3-D, which Scott says, “‘Gravity‘ treats 3-D as essential to the information it wants to share. The reason for that is summed up in the title, which names an obvious missing element. Nothing in the movie — not hand tools or chess pieces, human bodies or cruise-ship-size space stations — rests within a stable vertical or horizontal plane. Neither does the movie itself, which in a little more than 90 minutes rewrites the rules of cinema as we have known them.”

Scott also says that the storytelling isn’t faultless: “The script is, at times, weighed down by some heavy screenwriting cliches,” particularly “the tragic back story stapled to [Bullock’s character].” But the film has heart: “Much as ‘Gravity’ revels in the giddy, scary thrill of weightlessness, it is, finally, about the longing to be pulled back down onto the crowded, watery sphere where life is tedious, complicated, sad and possible.”

Owen Gleiberman of  Entertainment Weekly quipped ” ‘Gravity,’ though it’s set in space, isn’t really science fiction. It’s a drama built around the technology of space travel as it more or less exists today. What’s astonishing about the film is its hypnotic seamlessness — the way that the director, Alfonso Cuarón, using special effects (and 3-D) with a nearly poetic simplicity and command, places us right up there in space along with the people on screen.”

Time reporter, Richard Corliss advises don’t come late to this film, stating: “[The] amazing 13-min. sequence at the very beginning of ‘Gravity’ is shown in a single shot. To say this is a marvel of camerabatics, of visual choreography, animation and physical acting (Bullock and Clooney worked on wires in front of a green screen) is to undersell Cuarón’s gift as a storyteller who takes the audience on a nail-gnawing space flight. He’s a cinematic astronaut whose mission control is his retinue of visual enablers, led by special effects wizard Tim Webber.”

Jocelyn Noveck of the Associated Press asserts: “There’s only one truly correct way to experience ‘Gravity’. In a theater. On a huge screen. And in 3-D. Yes, even for all you 3-D naysayers — we hear you, but this is the movie you have to see in 3-D.” Once in the theater, “you’ll ask yourself, how did they do  this?” and “you’ll then forget the question, because you’ll be caught up once again in this 90-minute thrill ride.”

Mick LaSalle of the San Francisco Chronicle agrees:  “Cuarón has made a rare film whose mood, soul and profundity is bound up with its images. To see such images diminished would be to see a lesser film, perhaps even a pointless one.”