Wednesday was a night of firsts on Fox’s The X Factor, as the first live show for new judges Britney Spears and Demi Lovato, and the inaugural hosting stint for Mario Lopez and Khloe Kardashian.

Kardashian also provided the season’s first wardrobe malfunction, wearing a sheer top with no bra underneath. Kardashian was initially oblivious to the nip slip, until veteran judge Simon Cowell tweeted during a commercial, “I think the air conditioning is on high tonight looking at khloe.”

Otherwise, the night was a win for Kardashian, as she demonstrated strong chemistry with co-host Mario Lopez and advocated for the contestants, once even pressing judge Demi Lovato to clarify a comment.

Indeed, everyone seemed to be adjusting to the dynamic of the live shows, in particular Britney Spears, who along with Lovato, joins Cowell and L.A. Reid on the judges panel this season.

Ironically, as the most anticipated judge, Spears offered the least amount of criticism, if only because her responses were generally short and restrained—repeating the word “amazing” for nearly every contestant.

As mentor, Spears did deliver. Her teen group offered the most produced numbers, complete with Spears’s own trademarks: backup dancers, elaborate scenery and pyrotechnics. Teen group standout Rose Sonenclair even donned a plaid skirt reminiscent of Spears’s “…Baby One More Time” video for a vocally- impressive rendition of “I Get a Good Feeling.”

Despite Spears’s forced grins and limited commentary, the young contestants appeared confident in their coach. “Britney understands what it’s like to be a kid,” said Beatrice Miller at the end of the show, perhaps unknowingly alluding to the early stardom that led Spears down a path of personal troubles in her early twenties.

Maybe the media reappearance of those troubles—ex-manager Sam Lutfi is suing Spears in a highly publicized trial— was weighing heavily and contributed to her lethargic presence on screen.

Lovato, on the other hand, was feisty and combative, defending her batch of young adults (ages 18-24) against Cowell’s trademark jabs. “This may not have worked 100 years ago when you were good at this, but I think it could work now,” she retorted, after Cowell panned her contestant Willie Jones. 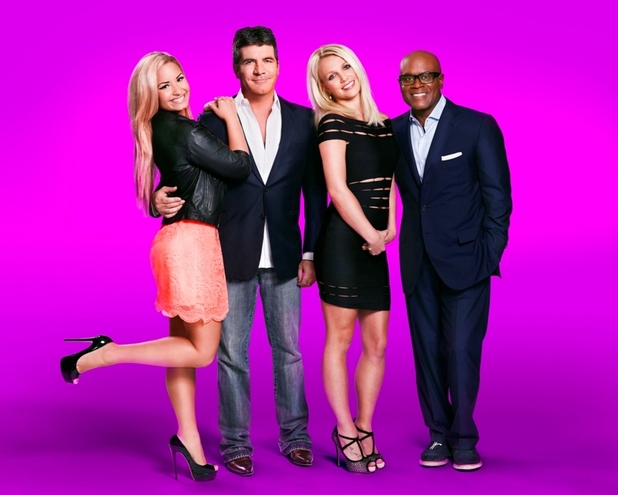 Cowell’s category—the groups—offered one stand out, Emblem 3. Echoing current act One Direction, the all-male trio made the audience (and Lovato) swoon over their performance of Matisyahu’s “One Day.”

L.A. Reid’s batch of adults (over 25) largely underperformed, as Reid still appears a bit shaky with older artists. He is known more for his work with young superstars such as Justin Bieber and Rihanna.

Tonight, the focus will return to the contestants, as each X Factor  judge must eliminate one contestant from his or her group. Although, if the first live episode serves as any indication, the antics of the judges and hosts will continue to grab a majority of the screen time.