The Creative Arts Emmys were awarded this past weekend — one week ahead of the Primetime Emmys — and several deserving creatives, Dave Chapelle being one of them, got to take home an award.

At the Sunday, Sept. 12 event, Chapelle was nominated for several categories but ultimately won an Emmy in the Outstanding Guest Actor in a Comedy Series category for his appearance as guest host on comedy showcase “Saturday Night Live.” This award makes it the comedian’s fifth Emmy of his career.

This is not Chapelle’s first time securing an Emmy award for the Guest Actor in a Comedy Series. He also won in the same category for “Saturday Night Live” in 2017. The very next year Chapelle won a Primetime Creative Arts Emmy Award for Outstanding Variety Special (Pre-Recorded) for his two Netflix stand-up specials “Dave Chappelle: Equanimity & The Bird Revelation.”

Chapelle partnered with Netflix in 2016 and signed a deal to bring host three stand-ups. According to The Hollywood Reporter, “the deal called for two previously unseen sets from his personal vault (The Age of Spin and Deep in the Heart of Texas) and one original,” which was “Dave Chappelle: Equanimity & The Bird Revelation.” For each of those specials Chapelle received $20 million.

Other celebrities who earned themselves an Emmy on Sunday night were people like Courtney B. Vance, who is Angela Bassett’s husband and an actor. Vance won for his role in the HBO series “Lovecraft Country.” Comedian and actress Maya Rudolph won Guest Actress in Comedy Series for an SNL performance, and Sterling K. Brown won the Narrator category for “Lincoln: Divided We Stand.”

The Primetime Emmys ceremony gets underway on Sept. 19 at 8 p.m. EDT in Los Angeles. 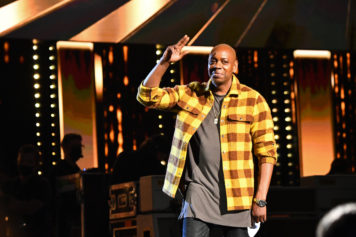