Actress and award-winning gospel singer Tamela Mann is gearing up for the release of her upcoming album “Overcomer.” She recently talked to Atlanta Black Star about what it was like creating the project and some of her life experiences that inspired the album, including her inspiring weight loss journey. The Grammy nominee also chatted about her friendship with Tyler Perry and what it’s like working with the brain behind the gun-toting senior Mabel “Madea” Earlene Simmons and more.

Your new album “Overcomer” is set to release next month. What was the thought process behind this particular project, and how is it different from your other bodies of work?

Well, I think it differs for me, this album, because I really came from a place of actual things that I’ve been going through on my journey the last five or six years. The last five or six years, I’ve been dealing with my knee. I had to have knee surgery, but prior to the knee surgery, I was working just in pain, but a lot of people didn’t know what. I just kept the poker face. And also another thing that we’re all, I’ve been dealing with my whole life, which is weight. And then I decided to just think about my health and wellness. These last few years, to really kind of tune in on it to do better.

And also with menopause. Me getting older in my 50s, and dealing with that issue was different for me and my family. And I know it’s one thing that is really not talked about in our community, you know. It’s like you hear about people going through the change, but we really don’t talk about what the change is. And it’s really a serious thing and even for you as a person emotionally, but even for your family to have to deal with and actually kind of cope and ride with you — ride with through this thing because, trust me, it ain’t a fun thing. I’ve cried, and all that. So those three points are things that I’ve talked about in this album. So, it really hits home with me this time. I’ve written some on past albums, but this one, but this one, I was part of pretty much every song.

You have a few guest appearances from Wyclef Jean and Kirk Franklin on “Hello God.” If you could collab with anyone you have never worked with, who would it be and why?

It was an amazing experience just to, for me — I was really geeked. First of all, I had told Kirk Franklin, we were working on another song, and I was like, “I really want to do a Caribbean tune,” and he looked at me like, “really?” I was like, “yeah.” I said I’ve never done it. So, when I do go to the islands, I have something to present. You know, to have, that’s of the culture and all that, and he was like, OK, and he just — we just kind of started working back on the music. And a few days later, he had an interview and it wound up being with Wyclef.

Wyclef played a clip, the chords of “Hello God.” And Kirk was like, “Man, I need that song for my sister, for Tamela Mann.” He said, “Do you know who she is?” He said, “Yes, I know who she is.” And so, a few days passed and Kirk call me and said, “I think I got your Caribbean tune,” and I was like, “what?!” I was like we just talked about this and, you know, the Lord just let them return just that fast, and he was like, “Yeah, I told Wyclef about you wanting to do a song and he was like, I think, yeah, he was like, ‘Yes, I want to do it.’” So we all talk, we all got on the phone, which I was really geeked then.

So it was really funny. I felt, you know, like a little teenage girl again, but since it was happening during COVID, he recorded it from home where he is and we recorded at home here, me and Kirk. But it was just great to just think of the vibe, you know, you wake up every morning and you say hello to everybody, but we never really give thanks back to God. Just for a new day, just to wake up and just say hello.

I want to collaborate with Celine Dion. I love her. I just think because she’s so small, but I seen her live at her show twice in Vegas, and I was like, “Man, that’s a dream of mine.” I did some work with Kirk and her years ago. … We did the choir part, but she wasn’t there. … I really wanted to team up with her and do something with her. Because I just think our voices could be compatible, that’s why.

Your album cover looks amazing! Your weight loss journey has been an inspiration to many. Share with our audience what motivated you to change your lifestyle.

Well it comes from, like, the single that I had. I don’t know if you [listened] to any of the songs, but it’s helped me. It’s the single that’s out. I was sitting and talking to the producer, which was Phillip Bryant on that particular song. Me and him were just talking because working on another song, and I was like I just really realized in my life right now that I need some help in different areas, and I decided to team up with Weight Watchers, and it really works. I lost 55 pounds. It was really a good great experience to kind of get me in that health and wellness journey to really realize and pay attention to things. And of course, it’s still a day-to-day thing. I’m still working on it.

Because it’s something that I’ve dealt with my whole life, you know. And so, it’s a day-to-day walk. It’s a day-to-day walk to make sure “Tam, what are you going to select today? What are you gonna choose to intake?” and that was, I won’t say it was hard for me, but it was hard for me because to do good and to eat, right? First of all, it’s more costly and I mean to just make that right decision. But I’m glad I did it and it was an eye-opener for me but to really pay attention to what I’m intaking every day.

A healthy lifestyle can be difficult, talk to us about your regimen and how you’ve been able to keep the weight off while especially having had knee surgery?

The funny thing about it is, once I was on stage and was going, I felt no pain. That was the craziest thing to me. Once I came off, like after I finished everything, then it hit me like, oh, you know. But that was another part to encourage me to go ahead on that. I need to do something different with myself and taking care of myself because I don’t want to be a liability on my family. I’m still working on that. I know one thing for me that is bad is bread, and I’m a sandwich person. I can eat a super sandwich every day and I will be happy.

So, really trying to remember when I’m eating. Like I would try to do like one starch, not like two or three starch on one plate. So that is one part of the regimen. I try to do the zero things, Coke, Zero dr-40 all the zeros, but I’m trying to cut back on that and take more water, but just really try to watch the carbs. Like, I’m trying to eat earlier in the day versus later in the day — that type of thing.

Well, what happened was we finished up end of ’98 going to 1999, which is when we met Tyler and we went out on tour, but a little bit more back story is we finished with Kirk Franklin and the Family. So my husband had talked to one of the promoters that we used and he was like, “Do you have any plays going out, or anything like that?” He was like, “I have this up-and-coming writer that I’m teaming up with. And I think it’s a good idea for you to meet him.”

So David [Mann] took some of our frequent flyer miles and flew to Chicago to meet Tyler Perry. And I didn’t go, because we ain’t had no money, like I said, in frequent flyer miles. So, he flew out there. He talked to him, and he was talking to him and auditioning, pretty much. He included me. He was like, “Me and my wife, we work together, you know, we sung together with Kirk Franklin and the Family, and she would love to come. And, you know, she said she can sing, you know, she’s not so much the actress.” So that’s how we teamed up with that. I came in. I was doing like two or three songs for the first play that wound up being “I Can Do Bad All By Myself.”

When Perry retired Madea, what did you think? You were a part of the farewell tour.

I was a part of the farewell tour. I kept telling him [Tyler] backstage while we were getting ready to start the show. I was like, how you gon’ kill my mama and you just gon’ put my mama in a box? Cora needs her mother. He would just laugh and, you know, we just did another movie together and I’m jumping, but that may be the last one, but I hope not.

You’ve been with your husband for over two decades, and you guys have primarily worked together at least half of that time. How have you been able to maintain your union, work together and survive reality tv?

I’m not trying to be like, “I’m out here too,” you know. Like sometimes people walk up and want to take a picture with him. I’m good with that. I don’t have to be in the picture, you know, all the time, I’m fine. And I think because we love each other — we started out as friends — we built this thing from zero to what we have now. We took divorce off. It was not an option. When we first got married we said we’re going to work through, whatever it comes, we’re going to work through it, and that’s what we’ve done.

And you know, day by day, I just thank God for him, and he thanks God for me, and we just love each other and just try to give our kids and our grandkids the best guidance that we can. But we nowhere near perfect. We don’t try to paint a perfect picture. We have arguments and misunderstandings just like everybody else. It’s been 33 years and we still having fun.

Finally, what’s the one thing you want people to walk away with after listening to your music, watching you in movies and on television?

I want to be able to leave some joy. When they walk away from here in this album “Overcomer” that they have some joy, understanding that love and compassion and mercy is still in this world. It’s not over, and whatever obstacles we have, we can overcome with God. All things are possible. If we just keep believing, keep trusting. Don’t lose hope and just remember that we can overcome and conquer. 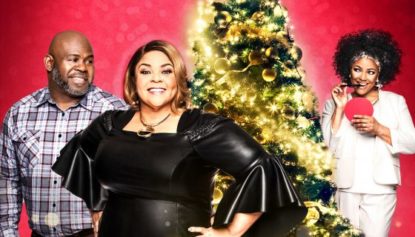