The work of tailblazing journalist Ida B. Wells’ is forever etched into the history of Black Americans’ contributions in this country, but now she will be forever memorialized in Chicago.

The co-founder of the NAACP was honored with a $300,000 bronze monument — The Light of Truth Ida B. Wells National Monument — that was unveiled on Tuesday, June 29. The 30-foot- tall tripod of columns and coiled metal-like flames stands in the neighborhood of Bronzeville, a place Wells once called home.

The monument was created by world-renowned sculptor and Chicago native Richard Hunt. Hunt is famously known for his “I Have Been to the Mountain” memorial for Dr. Martin Luther King Jr. in Memphis, Tennessee, and his “Freedman’s Column” on the campus of Howard University, a Historically Black College and Institution in Washington D.C.

Atlanta Black Star spoke with Wells’ great-granddaughter Michelle Duster, who considers the dedication of the memorial to be an exciting time for the community.

”I feel she’s very deserving. She spent over 50 years of her life, fighting for freedom, democracy and equalit,y and her life wasn’t easy,” says Duster. Born enslaved in Mississippi in 1862, Wells is lauded for her investigative stories on lynchings in the South, which were published in The Memphis Free Speech and Headlight — a newspaper Wells co-owned and edited.

“She went through a lot-: death threats, losing friends to lynchings and losing her printing press to mob violence. For her to dedicate her life to that kind of struggle, I think the least we can do is have a monument for her.”

The awe-inspiring monument is situated where the Ida B. Wells low-income housing once stood. The complex was one of the city’s oldest developments on the Southside, catering to its African-American population. Built in 1942, the complex stood for decades until the Chicago Housing Authority demolished it over the span of eight years — beginning in 2003 and ending in 2011. Former residents who understood the greatness of Wells’ contributions grew concerned that her legacy and name would become a distant memory in Chicago. So, the residents, along with the Oakwood Shores Working Group pushed for the city to properly memorialize the late journalist. Duster and her father were part of the efforts. From their efforts, and more than a decade of raising funds, the Light of Truth was birthed.

Duster envisions the monument being just the beginning of revitalization for the community so many have called home for generations.

“Our hope is there will be Black-owned businesses and a whole sense of community where people live, work and worship and entertain themselves in a tight-knit community,” she said.

“Hopefully it becomes a point of pride to Bronzeville, the kind of thing people want to serve as a backdrop to their lives here. That’s what I want — a gathering spot,” Duster told NPR.

Wells passed in 1931 at the age of 68, following a bout with kidney disease.

The Truth Monument is only one of two honoring Black women in Chicago. In 2018, fellow Chicago native and poet Gwendolyn Brooks was memorialized with a statue at a park also named in her honor. 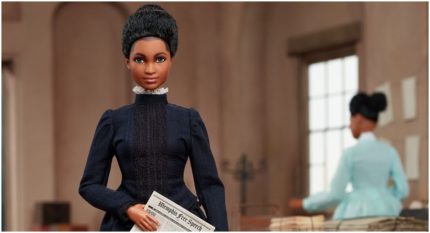 Author: Black History Observation Was Meant to be a Vehicle of Independence